You won’t find it on the show’s IMDb page, but cocaine plays such a major role in HBO’s new ’70s drama Vinyl (premiering Feb. 14 at 9/8c) that its name ought to be wedged into the credits somewhere between Ray Romano and Olivia Wilde.

From the moment we meet Bobby Cannavale‘s Richie Finestra — the spiraling owner of the spiraling American Century record label — he’s got Peruvian dancing dust on the brain, and soon after, up his nose. 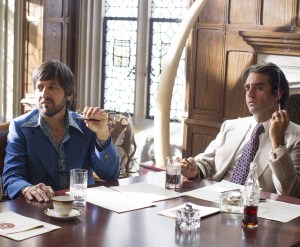 Richie is a man haunted by a horrible secret, gutted by the decision to sell his label to a German conglomerate and anxious about the future of his marriage to Wilde’s glamorous Dev, a former Warhol muse who’s grappling with chronic suburban ennui. But the spectacularly cinematic, beautifully bizarre final scene of the two-hour pilot episode — directed by Martin Scorsese — brings with it an epiphany for Richie that reverberates through the subsequent four episodes HBO made available to critics.

Fueled by line after line after line of blow, Richie makes a spectacular gamble — tanking the Polygram deal and betting that his combination of instinct, hustle and brutal ambition can revive the American Century imprint both artistically and commercially, even if it’s not guaranteed to save his soul.

Making Richie the sun around which all the action orbits is Vinyl‘s own spectacular gamble: He’s a selfish business partner, an absentee dad, a maniacal boss and an appalling spouse. (This last fact is solidified in Episode 5, when Richie cajoles Dev into doing his dubious bidding, then monstrously turns on her when he finds himself uncomfortable with the results.)

Richie’s saving grace is his keen ear and undying passion for music. And what Vinyl — not to mention Cannavale’s breathtaking performance — manages to do is bring that unlikely love story into stark relief. 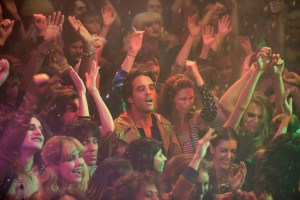 The pilot finds Richie stumbling into a New York Dolls concert at the Mercer Arts Center — and as he gets hypnotized by the raging guitars and androgynous electricity of their “Personality Crisis,” the suddenly slo-mo scene transports you right through the TV screen into the writhing, leaping pit filled with after-hours freaks.

When a killer chorus or an energetic lick worms its way into Richie’s heart, Cannavale’s face — which over the course of the series can be threatening, sleazy, cruel, insecure, high as Everest — noticeably softens with boyish wonder. And it’s this purity of purpose that makes it believable when Dev can’t quite pull the trigger on filing for divorce, when Richie’s partners Zak (a wonderfully wry Romano) and Skip (Hemlock Grove‘s J.C. MacKenzie) keep showing up for work, when his artists (sometimes) re-up their contracts even when they know they’re probably getting screwed in the process.

Vinyl also succeeds by providing more than a mere snapshot of the New York City music scene in 1973 — with its collision of punk and funk and rock and disco — but in doing so makes you more than a little crestfallen that you can’t hop in a Tardis and travel back to a simpler (albeit more crooked) place and time.

That authentic smell of cigarette smoke and the feel of beer-sticky floors is aided by the way Vinyl weaves its fictional characters with real-life characterizations and real-life events — in-their-prime versions of Robert Plant, Alice Cooper, even Robert Goulet crop up in the first five episodes — which isn’t surprising since the story springs from the minds of Mick Jagger and Rolling Stone writer Rich Cohen, along with Scorsese and Terence Winter (Boardwalk Empire, The Wolf of Wall Street). 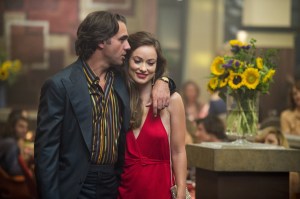 Where Vinyl is somewhat less sure of itself is in its treatment of characters not named Richie Finestra. (Well, that and its peculiar avoidance over its first five episodes of showcasing a single female recording artist – in an era where Aretha, Diana, Janis, Joni and many more sold a boatload of records.)

Wilde has the ability to make Dev deeply sympathetic — she’s lovely and heartbreaking when her embarrassed character has to beg Warhol to sign a silkscreen he gifted her, so she can turn around and sell it — but all too often her motivations aren’t explored beyond “sitting around and wondering what Richie will do.” Similarly, Romano’s financially strapped Zak has a startling moment of desperation in his garage — but like Dev, it’s hard to imagine his trajectory without Richie.

Vinyl‘s best subplot involves American Century’s sandwich girl (and in-house drug procurer) Jamie (Maleficent‘s Juno Temple, in a star-making turn), who’s traded in the stability of a restaurant-supply business promised by her disapproving mother (Alias‘ Lena Olin) for the dream of making it as an A&R rep. 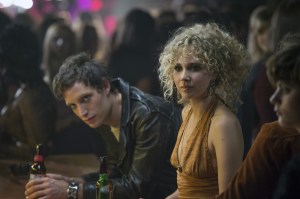 It’s Jamie’s discovery of a raw and angry band called the Dirty Bitz and its heroin-shooting lead singer Kip (newcomer James Jagger, son of the Stones’ frontman) that underscores Vinyl‘s greatest joy: While the record biz of the 1970s was certainly dark and full of terrors — including a mutton-chopped Andrew Dice Clay, sitting in a sex club and spewing horrific bile as radio-station owner Buck Rogers — it still believed in a mix of stardust and street grime that, fueled by audacity and brought to the right temperature, could create rock superstars.

Vinyl‘s greatest challenge will be getting its strong ensemble out from Richie’s imposing shadow — though, to be fair, the introduction of The Following‘s Annie Parisse as a whip-smart P.R. exec not interested in revisiting her past with our protagonist is a big step in the right direction. Failing that, though, Vinyl still provides satisfaction — whether or not its protagonist ever gets his.

The TVLine Bottom Line: Vinyl may hit one or two questionable notes in its first five episodes, but fueled by a beautifully realized sense of place and Cannavale’s certain-to-be-Emmy-nominated performance, it’s definitely worth a spin.