Let’s be naughty and treat this recap of Sleepy Hollow‘s midseason premiere like one of those frozen novelty cones sold by ice cream trucks: We’ll bite off and savor the delicious end first. Sound yummy?

Yes, most of us were fairly certain that Abbie hadn’t shuffled off to that great Corbin’s Cabin in the sky. Still, going nearly the full hour without a glimpse of Ichabod’s petite partner was no fun — and Team WTF was much the worse for wear. Jenny cried. Joe got pistol-whipped. Sophie breached the archives (?!).

Perhaps the saddest fallout from Abbie’s trip into the tree: Ichabod seemed about 50 percent less Crane-ier without her to gently mock him at every turn.

So that final scene with Agent Mills waking up in Pandora-knows-where was, to use Ichabod’s parlance, the finest balm to our weary, Sleepy souls. Read on for the highlights of “One Life.”

JUG LIFE | We start with a flashback to colonial times, where Ichabod and Betsy Ross pretend to be just another couple out for a stroll; they’re actually doing some recon on a British stronghold. And when they notice newbie agent Nathan Hale being a jackass (he doesn’t exactly have the “blend-in” thing down yet), Betsy takes him to task. Side note: I’m just impressed she has the breath to do so, because that corset looks like it takes no prisoners.

Ichabod cautions Hale that the most important things to learn are “patience and caution…” Cut to Ichabod on a motorcycle, buzzing down a backroad while trucks bearing men with guns follow and shoot at him. Way to follow your own advice, dude. He ditches them by making them think he’s drowned in the lake; back at the archives, he manically explains to Jenny and Joe that the artifact he stole — and which the apocalyptic cult guys pursuing him wanted back — is a Lydian jug used to somehow contact those in other realms. (There’s a lot more explanation here, but you guys don’t need to see the math.)

“The leftenant’s spirit is strong,” Ich says, all flapping coattails and gangly arms, poor thing. But when he adds that it’s up to him to find the missing Witness, Jenny goes off. “Trust me, we all want to find her,” she replies, reminding everyone that Abbie disappeared to save her. The anger in her voice knocks Ichabod out of his frenzied state, and puts his head in his hands as he apologizes for an unfortunate choice of phrase.

Jenny and Joe have their own lead, and they tell Ichabod to take a break while they suss it out. He says he will, but we all know he won’t.

WE WERE AS GODS! | Over in their hideout, Pandora tries to tease The Hidden One out of his really pissy mood. It doesn’t work. He blames her for Abbie taking The Eye — which is the key to him being omnipotent again — into the abyss, and he implies that if she doesn’t get it back, there’ll be literal Hell to pay. Ugh, guys, I don’t want to see these two do Scenes From a Marriage. Be evil! Make me hate you! Don’t make me want to Google “support services for emotionally abused former goddesses” on your behalf!

Anyway, Pandora managed to salvage part of her box from the rubble of her old hangout, so she uses it to summon demons from all over the world to come to Westchester County. We don’t actually see the beasts in this episode; I assume they’re looking for cheap flights and arranging pet sitters, finding a sweet Airbnb situation and the like. BUT THEY’LL BE HERE. 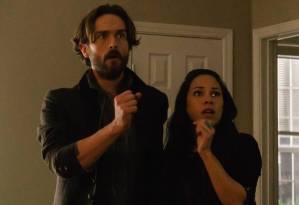 PAIN IN THE GLASS | So, back to Ichabod. He takes the jug and puts it the last place he saw Abbie: at Pandora’s busted-up ol’ treevil. But he leaves frustrated, not just that his incantation didn’t pull his partner out of the ether but also that Sophie from the FBI is tracking him as a person of interest in Ab’s disappearance.

Unbeknownst to both of them, his spell does work. That night, as he’s trying to cook dinner*, he hears a thump upstairs and finds Abbie’s camisole — the one he held up in “Whispers in the Dark” — on the staircase. “Leftenant?” he whispers (oh, the hope in his voice!), then sees “Help me Crane” traced on a bedroom mirror from the inside. When he touches the glass, something grabs his arm and pulls hard. He wrestles his wrist away and notices that he now has a brand on his forearm. (*You can’t tell me that a reader like Ichabod Crane wouldn’t have at least given a cursory glance to the instructions on the microwave lasagna.)

While Ich is still reeling from his mirror moment, Sophie calls: Someone carved “Help me Crane” into her hardwood floor, and she’s pretty sure it’s him. But after seeing a matching brand on Agent Foster’s arm, and having a wraith-induced vision of Abbie begging for his assistance, Ichabod has another idea of who’s behind the messages: “It’s Abbie,” he says. “She’s dying.”

EVERYONE IN THE POOL! | Sophie is very weirded out by everything she’s seen. And Ichabod has got to be lonely, right? And scared? And all at sea without his Biblically foretold BFF? I’m not giving him a pass, I promise: I’m just trying to figure out why in the name of Washington’s wooden teeth Crane would bring an untested newcomer into the archives after one mere ghost sighting?

OH WAIT, NOW SHE’S IN THE MASONIC CELL, TOO?! I have nothing at all against Sophie as a character, but slow your roll, Ichabod. At least she proves her worth by helping you jump into a mirror to find Abbie — upon realizing their brands made a gateway, Ich and the FBI agent determined they had to build a mirrored portal to rescue her — and pulling you back out when things got dangerous. “If the leftenant were here, she would say something tough yet encouraging, with which I would wholeheartedly concur,” Ichabod says wistfully. Yeah, I think she’d say, “I’M GONE FOR FIVE MINUTES AND YOU’RE LETTING EVERYONE INTO THE CLUB?,” but that’s just me.

Anyway, Ichabod’s mirror dive brings back a creepy vengeance demon who dresses way worse than Buffy‘s Anya, who moves like she’s in the American Horror Story opening credits and who is gunning for someone who’s also pining for Abbie: Daniel. Oops. Or, as Sophie puts it: “You were catfished.”

STORAGE, FORAGE AND SCORE-AGE | Where are Jenny and Joe throughout all of this, you ask? They’re tracking down an artifact that can tell you demons’ locations; think of it as a less-fun version of Harry Potters‘ Marauders Map. And it makes sense that Randall — the good-looking scoundrel whom Jenny and Joe dealt with at the beginning of the season — has it: I can solemnly swear he is up to no good. (No, seriously, Sleepy Hollow? You could do a lot worse than making Anthony K. Hyatt a heavily used recurring presence on the show.)

J&J track the map to Randall’s storage locker… and then he and his thugs show up to take it back. (Before that, though, Joe mentions, “Someday, you’re going to have to give me the full rundown on the adventures of Jenny Mills.” Spinoff?! I’d watch!) When a gunshot goes off off-screen, Jenny worries that Joe is a goner; turns out, he got the jump on Randall’s goons, allowing him and Miss Mills to make a quick getaway with the coveted chart in tow.

Back at Jenny’s trailer, she’s rattled by the experience. “When I thought Randall’s guys had shot you, I thought I lost Abbie, and now I’m gonna lose another person that I love,” she says. (By the way, Lyndie Greenwood does so much with so little in this scene.) Joe strides over and kisses her, and it’s a very sweet moment.

CARRY ON | After the vengeance demon kills a few more people, Ichabod and Sophie track it to Daniel’s cabin, where they trap it in a mirror and then destroy the looking glass. (Daniel, lured back to the office by Sophie’s false lead on Abbie, remains oblivious.)

Does it seem like Sophie was super quick to accept the paranormal? That’s because her parents, who were archaeologists, disappeared under mysterious circumstances when she was a kid; she’s always suspected demons were involved. And when she finds Ichabod in the archives the next day, he remembers how the Nathan Hale story turned out: with Hale hanging for treason, and Betsy warning Ichabod that they only thing they could do was bear witness, because “not all our partners will survive” and “the best you can do is continue your mission.”

Jenny and Joe show up with the map, and I love Jenny’s face when Ichabod says they can “speak freely” around the visitor. But she disregards this new information for a moment to show them the map in action: It looks like Sleepy Hollow is gearing up for MonsterCon 2016. A reinvigorated Ichabod says he’s ready to party.

MISS MILLS IS M.I.A. | Meanwhile, in what looks like another dimension, Abbie wakes up, sits up and looks around, confused. 1) Yay! 2) Where the heck is she, anyway?

Now it’s your turn. Grade the midseason premiere via the poll below, then hit the comments to give your thoughts on the episode!