This Tuesday on The Flash, Harry started stealing Barry’s speed (with near-disastrous consequences), while Iris worked her reporter wiles to hopefully put the brakes on Wally’s racing habit.

As I recently expressed to EP Andrew Kreisberg, I had my issues with how the Wally West arc started — the whole Angry Young Man Bristles at the Father/Sister He Never Knew thing. But as he noted here and as played out on-screen this week, Wally’s emotional walls are justified and, ultimately, there will an end to this means.

As Iris notes during an otherwise civil family dinner, Wally is “all about the speed,” fascinated with not just cars but rocket ships and what not. Iris then takes Joe to task for acting more like Wally’s age-inappropriate buddy and less like his father. When Joe resists putting on his cop hat to try to shut down the street racing, Iris dresses for the occasion to attend a race herself, where she snaps a pic of the creep who runs the illegal doings.

Later, Iris pays a visit to this Clarke dude, to task him with ceasing the races and offer a preview of tomorrow’s CCPN expose on his myriad illegal activities. Clarke reacts by physically threatening Iris — all of which, she reveals, she recorded and transmitted back to CCPN. Though obviously a bit shaken by the close call, this was a big first step in Iris using her skills to be a crime-fighting “hero” of a different kind.

Meanwhile at S.T.A.R. Labs, Harry coupled his sample of the Turtle’s noodle with learning from Reverse-Flash to engineer a frankly super-conspicuous gizmo (do we really need blinking lights on the thing we want to hide??) that will discreetly sap some of The Flash’s speed. During one of Barry’s first clashes with Villain of the Week Tar Pit, Cisco notices a slight slowdown, but everyone shrugs it off.

Both working late one night, Barry offers to help Harry figure out how to shut down all the breaches, speed-studying an Earth-Two tome on CFL Quark somethingoranother to do so. When Barry at one point comments on enjoying a mentor/father figure relationship again with another Wells, guilt-ridden Harry snaps back, “I did not ask to be your mentor! I already have one kid, I don’t need another.”

The next day, circling back on the outburst, Harry warns Barry, “One day Zoom will make me choose, and I will always, unflinchingly choose my daughter. I will betray you.” Barry argues that that is binary thinking — it needn’t be either/or — but Harry scoffs.

Later, Harry delivers the stolen speed to Zoom — “Drink up!” — with the promise to get the rest once his daughter is safe. But Zoom isn’t one to make deals. Rather, he ups the ante by threatening to torture Jesse within an inch of death, over and over, until Harry comes through. Some time after, Harry and Barry truly bond when their first stab at imploding one of the breaches is a success: “The first step in getting your daughter back,” Barry trumpets, adding guilty salt to Harry’s guilt-ridden wound. 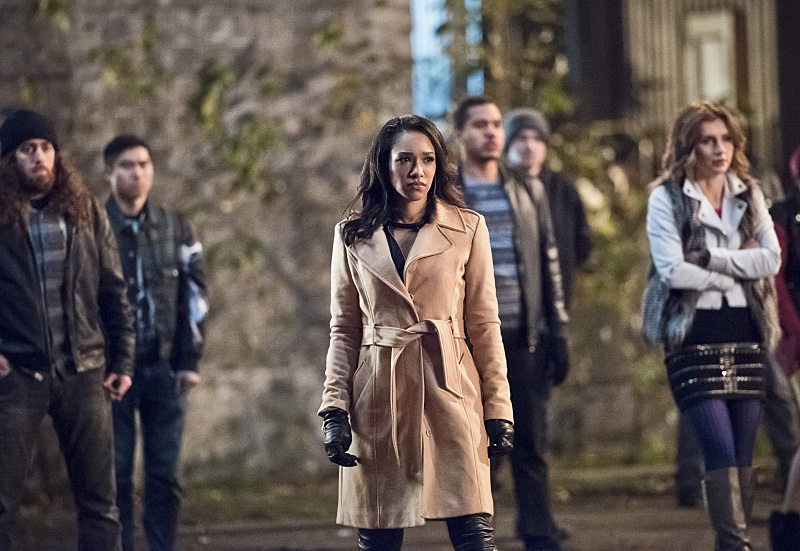 stealthy speed-sapping becomes evident when at one of Wally’s races, Tar Pit warps the road and effectively flips the young man’s car. Barry saves Wally, as well as that guy Clarke, yet is just slow enough to not stop a shard of glass from impaling Iris through her coat. Iris isn’t gravely injured, though, and her hospitalization paves the way for Wally to, at Joe’s behest, learn to be an attentive brother — as well as share how his need for speed is pegged to memories of long drives with Mom.

Back at S.T.A.R. labs, Caitlin confirms that Barry is moving exactly 2 percent slower than usual as of late, eventually prompting Harry to confess to his scheme and expose the blinky speed-sucking device. Joe lays Harry out then lobs him into the Pipeline. After Harry suggests that Barry send him back to Earth-Two, trapping Zoom over there with him — “jesse’s my battle t fight, not yours” — Barry later argues to the team that they would (and have) acted as Harry has, protecting family at any cost.

Barry’s counterproposal thus is to keep Harry on the team and instead take the fight to Earth-Two, setting the stage for, based on the promos, a highly entertaining trip to the Other Side next week.

What did you think of the episode “Fast Lane”?