Will Wally West fulfill his fate in a Flash? Can Once Upon a Time‘s Belle avoid a pregnant pause? Which HTGAWM relationship is getting more complicated? Is Lucifer packing a “huge” surprise? Read on for answers to those questions plus teases from other shows

Would love some scoop on The Flash and Wally and Iris’ relationship. –Carrie
Though Joe has started to smooth things over with the lad, “Wally still has some rough edges to be sanded down,” affirms EP Andrew Kreisberg. And that’s where Iris steps in, beginning this Tuesday — just don’t expect a 180-degree turnaround for the angry youth. “It would be a disservice to the character if suddenly everything was hunky dory with him,” says Kreisberg. When we met Wally, “He was about to lose his mother, the only family he’s ever known; he has this ‘instant family’ that is trying to figure out a way not to drive him away while also giving him the love that they so desperately want to give him; and he’s also a young man. All of that is a hard road to travel, and it is going to have its bumps and its miscommunications, but ultimately — and this is no surprise if you read the comics — it’s all heading toward a good place.”

Is there anything coming up for The Flash‘s Jay and Caitlin? –Justin
As we’ve started to see, Caitlin is determined to keep Jay from dying, having not had the same option the two times she lost Ronnie. “When Ronnie died, both times he was literally snatched out of Caitlin’s life. She had to stand by and watch, helpless,” EP Andrew Kreisberg notes. “But the problem that Jay is facing is [based in] biochemistry — her specialty — so she is determined to not let history repeat itself. Instead of being a victim of fate, she is now in the driver’s seat, and that creates a very different dynamic for her. It definitely lets her shine, while also showing a vulnerability to Jay. It’s always hard to see your heroes be weak, and in some ways it’s harder for the hero themselves, to need to be saved. ”

I was wondering if you could share any information about Once Upon a Time’s Belle and the challenges she might be facing in Season 5B? –Todd
In addition to the flashback featuring (a new) Gaston and leading right up to the events of Season 1’s “Skin Deep,” “We have plans to keep Belle busy,” co-creator Adam Horowitz assures. “Although she didn’t get on the boat [to the Underworld] with our heroes, she’s important to the story and becomes very involved.” As for her rekindled romance with Rumple, “We left them in a place where that relationship was evolving” — though unbeknownst to Belle (played by a pregnant Emilie de Ravin), her husband has gone darker than ever. “We’re not abandoning any of those story threads,” says the EP, “and we’re hoping to pick up on them in an unexpected way.”

Will Castle have a two-parter after it comes back in February? –Rachael
There won’t be a traditional February sweeps two-parter, though it’s my understanding that Episodes 13 and 14 (the latter of which features Rick, Alexis and Hayley’s trip to L.A.) are companion pieces of a sort.

That mid-season finale of How to Get Away With Murder left me breathless. Any scoop you have on the premiere would be appreciated. –AdMa
Karla Souza tells me that in the wake of the finale’s big jaw droppers, Laurel’s relationship with Annalise will only strengthen. “You’ll see, in the first episode back — it’s like a whole thing, that nobody knows about. Annalise dumps a lot of responsibility on her, and you’re going to see how Laurel deals with it.” Souza also says that Laurel’s already-odd protectiveness of Wes becomes “more complicated and more bizarre,” while the fact that Annalise knows secrets about Laurel’s father points toward a new kind of mystery. “Laurel realizes that this woman knows more about us than we even know, that there’s a reason why she picked every one of us,” Souza says. “And that’s going to open up a whole other emotional journey for each of them.”

Is there any chance another network will pick up Titans, now that TNT has abandoned it? –Greg
Interestingly, when we chatted up DC Entertainment CCO Geoff Johns at TCA — just days after TNT let slip the bad news — he shared, “We [at DC] have known about [Turner nixing Titans] for months and months and months. That’s not new news to us.” The silver lining: Regardless of the basic cabler’s decision, “We have plans for Titans,” Johns asserted. “It’s a huge piece of DC and we have plans.”

I see no chatter about Clark’s appearance on Supergirl. Do we get teenage Kal-El in Episode 13? –Ashley
Indeed, you do. Daniel DiMaggio, who played a young Michael Westen on Burn Notice (and whose credits also include The Haunted Hathaways), plays Kal-El in next Monday’s Krypton-set “For The Girl Who Has Everything.”

Can you please give me 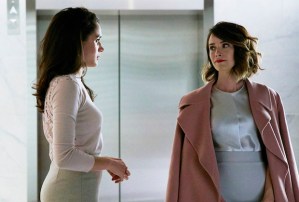 some information on Suits? –bevieg
Scottie and Trevor’s returns in the season premiere were just the tip of the iceberg. Word of Mike’s arrest “getting out there, and the desire to ultimately fight the charges, is going to bring people out of the woodwork,” executive producer Aaron Korsh previews. “We’re going to meet a lot of old friends and foes, not just in the search for who turned Mike in, but a lot of it is in the defense that we’re going to be constructing over these last six episodes.”

Any inside info on Shameless? –Whitney
We have not seen the last of Fiona’s angry hubby (played by Steve Kazee). “Gus is still bitter about what she did,” exec producer Nancy Pimental describes. “He’s going to make her jump through some hoops, and he’s going to make her pay in his own special way.”

After what you said in your TV Questions column, should Arrow fans be worried about Katana? —Leanne
Meaning, is she being brought back just to be written off à la Deadshot and Waller, other DC Comics characters that existed on Arrow but will also be in August’s Suicide Squad movie? That I do not know, though Katana’s nest appearance promises to be “surprising.” As EP Wendy Mericle told me, “We loved that Tatsu last season kind of evolved into [Katana], so we’re really excited about her return. It was great to have Rila [Fukushima] back and to see that character again, but it’ll be kind of a new, surprising way that we do it.”

Anything Lucifer-related? –Lindsay
Lauren German teased this about the first time Chloe lays eyes on Lucifer’s hell of a house: “The first time I walk in, let’s just say that I’m very impressed. The bar alone, it’s like 900 whiskey bottles. And then I am very much surprised and shocked at what I see next. Lucifer makes a huge entrance,” she shared with a laugh. “Chloe gets really red in the scene and really, really shocked.”

What did Howard Gordon 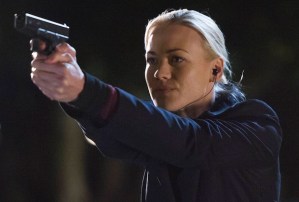 say to you about not using Yvonne Strahovski’s Kate Morgan in 24: Legacy? –Justin
It’s not that he ruled out using her (or other past characters) at all, he simply shared that a Kate-centric revival was among the pondered, but ultimately passed on, possibilities. “We’ve been thinking about this forever, even before [Live Another Day]: Is there a new series [to be launched]? Is 24 Jack Bauer? For the longest time it was, until after Live Another Day we all felt his story really has been told.” For the reboot/revival, “Kate was [considered as the focus], but we took a lot of runs at this until we found the right configuration,” he said. “We’re not just doing this as a callow exercise in bringing an old title back.” That said, Jack, Kate et al remain “in the 24-verse” and “of course” may get shout-outs, Gordon allows. “Everybody’s fair game!”

Will NCIS: LA‘s Nell and Eric be out of Ops and in the field together in any scenes coming up? –Tony
Nell was just recently out in the field, on the boat with Kensi and Deeks, so it is now Eric’s turn to break away from the keyboards and monitors, in the Feb. 22 episode.

On Agents of S.H.I.E.L.D., will we see Andrew again or is he now just Lash? –Susan
Last we saw, Andrew seemed in control of his “Lashing out,” but whether he can ever be separated from his Inhuman alter ego — especially after indulging in that grisly rampage! — remains to be seen. “In her hope of hopes, May’s hoping [Andrew can be brought back],” says Ming-Na Wen, “but… I don’t think it’s happening. But I just don’t know!”

Real questions, real answers. If you need the Inside Line on a favorite show, email InsideLine@tvline.com!  (With reporting by Vlada Gelman and Michael Maloney)