For over a year, The Flash‘s Barry Allen has been tormented by Reverse-Flash — first, on the streets of Central City, and then via the video that “Harrison Wells” left behind, warning that the scarlet speedster will never be happy.

“You got little glimpses of Matt Letscher (Scandal) last year, but this is his first full-fledged episode,” executive producer Andrew Kreisberg says of Eobard Thawne’s timey-wimey encore. “What’s fun about this episode is we’re meeting the Reverse-Flash before the events of last season, so he doesn’t know Cisco, he doesn’t know Caitlin, he doesn’t know this [young adult] version of Barry, and he hasn’t [traveled back in time and] killed Harrison Wells yet, either. All of that is in the future for him.”

Even so, akin to the chilly reception Earth-Two’s “Harry” received upon meeting our Team Flash, the reactions will be so, so strong when this familiar figure’s presence becomes known, given his association with such a long stretch of duplicity and death. “Everyone’s feelings are very raw,” previews Kreisberg. “They still feel the sting of betrayal and they’re all angry and hurt and devastated…. It creates a very different dynamic that is interesting to see.”

Also interesting to see is Letscher’s performance, Kreisberg says, seeing as he is playing the same character, Eobard Thawne, that Tom Cavanagh (surreptitiously) inhabited for all of Season 1. “Matt did something amazing, which was he took Tom’s performance and integrated it into his own,” the EP raves. “It really does feel like they’re the same character.”

Speaking of Harry: Moments before the tease of Eobard’s arrival in present-day Central City, last week’s episode showed the extreme lengths to which Earth-Two’s Wells is willing to go in the name of… um, what is he up to exactly? Did he snuff the Turtle to save Barry, or to safeguard Zoom from a slow-down?

“You definitely should be wondering,” Kreisberg affirms. “Last season, Wells was fundamentally a bad man who’d been put into an impossible situation. This year, he’s a fundamentally good man who’s also been put into an impossible situation,” leveraged to save his daughter Jesse by helping Zoom steal The Flash’s speed. “But while there is the similarity of working cross-purposes against the team, it’s all coming from a very different place.

“He really feels like he’s between a rock and a hard place,” Kreisberg continues. In the end, “I think he’s going to be faced with: Barry or Jesse?”

Elsewhere in this week’s 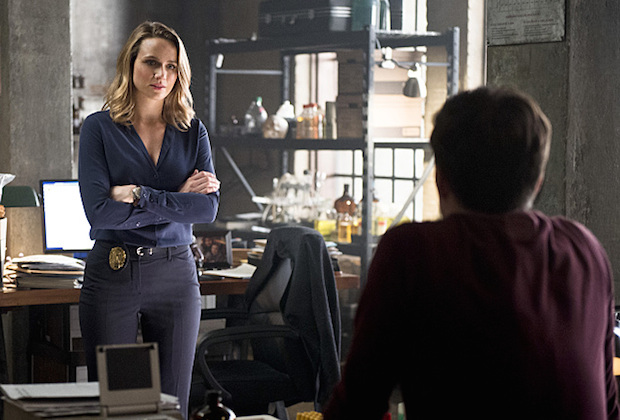 episode, Shantel VanSanten makes a final (for now?) appearance, as Patty Spivot gets a “great send-off,” Kreisberg assures. And as sad as it is to see Barry lose a romantic interest because of his secret identity, “It’s all a part of his journey this season,” struggling as he has been to avert the sad fate forecast by Wells’ post-mortem video.

“Barry was determined to sort of say, ‘That’s not true, I am going to be happy.’ And then his dad gets out of prison and decided to go on a walkabout. And then he meets this great girl and the relationship gets ruined. Everything that Wells predicted has sort of come true,” Kreisberg recounts. Coming off the Patty break-up, “Barry will turn his attention back toward Zoom, thinking, ‘If I could just beat Zoom, I’ll finally be happy’ — which might be a rather rose-colored outlook for a superhero destined to have ongoing foes.

“Barry doesn’t realize that he’s the star of a TV show,” Kreisberg quips. “Oliver [Queen] is used to the never-ending battle against evil, but Barry hasn’t quite gotten his head around that yet!”