Dana Katherine Scully, this is on you.

Before you arch that eyebrow, hear me out. The X-Files‘ revival gives this longtime X-‘Phile the same pleasant feeling inside that Mulder’s CPR gave your frozen, sludgy self in the first movie. I’m like Eugene Tooms with a fresh liver, Donnie Pfaster with a natural redhead, the chupacabra with plenty of cabra to chupa: Bottom line, I’m stoked.

But Doc, can we have some really real girl talk for a minute? The fact that Season 10’s central premise — the X-Files are open again! Whee! — even happens is because you make some very terrible decisions whenever it comes to that red Speedo-wearing, sunflower-seed chomping, pencil-throwing tall drink of water you call a partner ex-partner former lover baby daddy Mulder.

You had gotten out, Red! You had distanced yourself from the crazy that follows Fox Mulder around like Pig Pen’s dust cloud. Your life might’ve been a little less fun and a little more predictable, but I’m guessing it also was a little less likely you’d end up digested by a hallucinogenic fungus, so maybe we call it a draw?

Yes, Mulder is hella smart. Yes, he’s William’s dad. Yes, I, too, probably would’ve let him coast for years on that orange-is-the-new-hawt reunion kiss in the series finale. But I can’t for the life of me figure out why you decided to take one more turn on the tilt-a-whirl by rolling your eyes, shaking your head and resignedly agreeing again to be his partner-in-weird… though I’m certainly glad you did.

Read on for the highlights of “My Struggle.”

THE FIELD WHERE I DIED | While we see a series of photos from the original series’ run, Mulder’s voiceover catches us up on all nine seasons of the Fox drama — and the movies — in just about a minute. (How I’ve missed that bored drone!) He wraps the review by telling us that the X-Files closed years before, “but my personal obsession did not.” Same, Mulder. Same.

After the classic credits, in which Scully in particular looks like a zygote, a flashback takes us to the scene of a UFO crash in the 1940s. A scared-looking military doctor gapes at the smoking rubble… and the injured, humanoid alien crawling away from the wreckage. The soldiers shoot it to death, to the doctor’s horror; he wraps the body in a sheet and carries it off to see what he can learn from its corpse.

THE EX FILES | In the present day, Scully is scrubbing in for a surgery at a Washington, D.C.-area hospital when she gets a call from her old boss, Skinner. Long story short: a conservative and wildly popular Internet talk-show host named Tad O’Malley is “desperate to meet” with both Mulder and Scully about something super secret and rather important.

So the former partners meet up to talk to Tad, and that’s where it becomes clear that they’re no longer together romantically. First piece of evidence: Mulder looks like an unmade bed in which you might spend a hungover weekend. Even when he was the Unabearder in I Want to Believe, he didn’t look this rough. Second piece of evidence: They flat-out say they’ve split, though the vibe is cordial. “It’s good for you to get out of that little house every once in a while,” she says. “It certainly was good for you,” he replies.

I’d be remiss not to mention that this scene feels a little… off. Duchovny and Anderson say “Mulder” and “Scully” like they’re speaking a foreign language, and I can only imagine that it must’ve been weird to reacclimate to a life they haven’t lived in quite some time. But luckily that awkward feeling works well for a scene between two former lovers, and it fades soon enough. 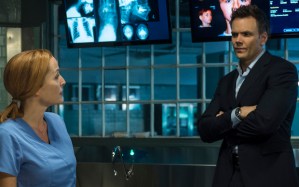 WEIRDOS OF A FEATHER FLOCK TOGETHER | Tad (played by Community‘s Joel McHale) adores Mulder and Scully and, after a brief extraterrestrial pissing match with Mulder, proves that he’s as obsessed with the idea of an alien-tinged conspiracy as Fox is. O’Malley needs their “expertise” before he goes public with what he knows — uh, OK? — so he introduces them to a multiple abductee named Sveta (The Americans’ Annet Mahendru) who claims multiple alien pregnancies and the ability to read people’s minds and move objects without touching them. Oh yeah, and she has alien DNA. “Something you could test, Dana?” Mulder asks of his increasingly skeptical partner, whose face says, “First-naming me not even halfway into the premiere? Really?!”

O’Malley takes Mulder to see a UFO developed by humans using alien technology. Aw, Mulder. You look so happy! Scully, as usual, gets the suckier job: collecting Sveta’s blood to see if there’s anything amiss. After an unsettling conversation when the younger woman intimates that she knows about William, the son Scully gave up for adoption years ago, Scully decides to take send a vial of her own blood for testing, too. Then Tad shows up and hits on her. I think most of us would think it’s a little creepy that he’s putting the moves on her in the worst-lit surgical suite ever, but poor Scully has only known the love of a med school professor in midlife crisis, an FBI instructor who switched souls with a bank robber, a lowly lab tech, Mulder and some guy named Rob… so she agrees to take a ride in O’Malley’s limo.

AN ABRUPT CHANGE OF COURSE | Of course that’s the exact moment that Mulder, fresh off a conversation with Sveta, decides that the abductee’s thesis — that men, not aliens, are the ones taking her, impregnating her and performing tests on her — is The Truth. So he calls Scully and tells her, “Sveta is the key to everything,” then gets cagey and hangs up. (I wish I were condensing for the sake of this recap, but that’s pretty much exactly how it plays out.) Also: Mulder, are you high? This is a big leap, even for you.

Anyway, Mulder runs to the old basement office he and Scully used to share (the pencils in the ceiling!), gets surly with Skinner, laments his wasted time at the FBI chasing bad leads and kicks the “I Want to Believe” poster so it rips. Mulder then meets with a contact — the now-elderly physician from the flashback — who tells him that his idea of a “venal conspiracy of men” armed with alien technology and working against humanity is close, but not quite there yet.

SCULLY SHUTS. IT. DOWN. | Pretty soon, a worried Scully, an eager Tad, a wary Sveta and a frothing-with-excitement Mulder convene at Mulder’s place, where Mulder lays out what he believes are the conspiracy’s plans for the destruction of civilization. If you watch Gillian Anderson closely in this scene, you can see Scully’s frustration go from rolling boil to pressure-cooker malfunction as Mulder speaks, until all that’s left is for her to go off. Calling her former partner’s thesis “fear-mongering claptrap isolationist technoparanoia so bogus, dangerous and stupid that it borders on treason,” she deflates everyone’s excitement by announcing that Sveta has no evidence of alien DNA.

GETTING THE BAND BACK TOGETHER | But something is definitely up, because it’s not long before Sveta is refuting/smearing Tad to reporters and Tad’s show goes offline indefinitely. “They got to her,” Mulder laments as, unbeknownst to him, men in Hummers blow up the UFO Mulder saw and a craft finds Sveta and appears to kill her by incinerating her car.

But now Scully’s anger has burned off, and it’s been replaced by cold dread. She confesses to Mulder that she retested both her and Sveta’s blood; though she doesn’t outright say it, it’s implied that Scully’s sample had wonky DNA, as well. Near tears, Scully mentions William, and then both she and Mulder receive a text from Skinner.

Exactly what happens next is unclear, but when we see a burned-but-very-much-alive Cigarette Smoking Man on the phone, telling someone “We have a small problem: They’ve reopened the X-Files,” IT IS ON!

What did you think of the revival’s premiere? Grade the episode via the poll below, then hit the comments to expound upon your thoughts!