Getting over a break-up is hard enough. Dealing with a split forced by the fact that you and your love are now, legally, siblings? Well, that’s a special scenario reserved for The Fosters‘ Brandon and Callie in Season 3B.

When the Freeform series returns Monday at 8/7c, the pair will attempt to put their rollercoaster relationship behind them by focusing on new projects… and other people?

Below, stars Maia Mitchell and David Lambert preview how Brandon and Callie are dealing with living together, but not being together, and their potential new romances.

TVLINE | What is Callie’s mindset when the new season picks up?
MAIA MITCHELL | Callie’s just been adopted, so she and Brandon are really putting their feelings for each other completely aside for good. She’s doing her own thing. She’s working on her website and becoming a voice for foster 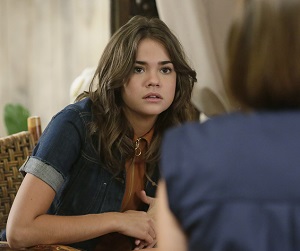 kids and raising awareness for issues with the system. She’s coming into her own. Now that she’s part of the family and has her feet on the ground, she’s able to really embrace her passions and what she wants to do.

TVLINE | What are Brandon’s feelings about their relationship now that she’s been adopted by the Fosters?
DAVID LAMBERT | Between the two of them, it’s this idea of burying the hatchet. We’re in agreement to leave it alone, and he definitely does a good job, at least for now, of distracting himself with other things. He’s got a senior project coming up, [for] which he decides to do a musical adaptation of Romeo & Juliet. There’s a possible new love interest, actually, a character named Courtney that comes in to his life. He starts investing into her.

Callie and Brandon end up opening this dialogue of being able to talk about other people in their lives besides each other. It’s a new chapter for these two. It’s healthy, it’s good. Ultimately, they’re just trying to move on as best as they can. But with that said, the show is definitely a catharsis with the whole forbidden love theme and everything that’s included with that. So it goes back and forth.

TVLINE | In the promo, it looks like they might have a difference of opinion on how to handle things.
MITCHELL | It’s a push and pull. It’s hard for both characters. There’s a point where Callie feels like she wants to move on together and for them to be a team in moving on, and Brandon has to say to her, “No, we can’t do this together. We need to do it separately and on our own.” It’s that process of letting go. Everyone handles it differently. But they both have the same goal in mind, which is to allow her to be a member of the family. They’re both really working at finding their own happiness aside from each other. That’s a really healthy thing for young people to do.

TVLINE | Any new love for Callie? Maybe with AJ?
MITCHELL | AJ’s back, so you’ll see that relationship develop in a certain way, absolutely. She now has room to explore other options. I don’t think anyone wants to meet the love of their life at 16.