Every Hotel stay must come to an end, and American Horror Story delivered a final installment Wednesday that included a poignant death, several not-so-shocking returns and a ghost becoming addicted to social media.

The anthology series’ season finale opened with Iris and Liz calling a spectral summit: Sally and Will’s incessant murdering of guests was doing nothing to help the newly gussied-up hotel’s Yelp score or future reservations. And without customers, March chimed in, there’d be no way for the Cortez to make it to Aug. 23, 2026 — the date the building could be determined a historical landmark, ensuring that the ghosts would have a home forever.

When the heroin addict and the designer balked, Liz and Iris went about securing their support in a different way. Iris bought Sally a phone and introduced her to Twitter, Facebook, etc. And when “being numb to the world finally lost its appeal,” as Liz voiceovered, Sally kicked her drug habit for good. Meanwhile, the bald beauty cajoled Will into creating new sketches for his crumbling fashion empire… of which Liz then became the public face.

THE HEART WANTS WHAT IT WANTS | But Liz’s enduring sadness over Tristan’s death — and puzzling absence from the ghostly goings-on — led Iris to hire Season 1’s Billie Dean Howard to contact his spirit. The young punk didn’t want to talk to Liz… but Billie’s introduction to the hotel had consequences we’ll talk about in a minute.

Soon enough, Liz got more bad news: prostate cancer. In an effort to be around to watch her new granddaughter grow up, she asked the ghosts to take her life on hotel property, making sure she’d haunt the property forever. And that’s when The Countess showed up just in time to slash Liz’s throat. (It was an act of love. Really.) And as the reborn Liz stood over her own corpse, Tristan appeared. “You are to die for,” his shiny-headed love said, and they kissed.

PARTY CRASHER | The action then skipped ahead to Oct. 30, 2022, the night of Billie’s now-annual TV special shot at the hotel. This time, the elusive John actually appeared to her, saying that if she ditched her camera crew, he’d show her the hotel’s real secrets. So he brought her to the yearly serial killer shindig, where Wurnos & Co. warned her never to return to the premises — and Ramona showed up to add a little real world threat of blood-sucking to the festivities.

But where was John’s family? Turns out, after being on the lam for a while, he brought them back to Los Angeles, where he was shot by police just outside of the Cortez. His (still very human) daughter, Scarlett, was sent away to school; we learned that the only time he, Scarlett, Alex and Holden are reunited each year is Oct. 30 — Devil’s Night — at the Cortez.

So how did it end? With The Countess, wearing a barely-there blue number, attracting the attention of a handsome young thing at the hotel bar. “You have a jawline for days,” she purred. Watch out, man!

Grade both the finale and Hotel‘s season on the whole via the polls below, then hit the comments with your thoughts on the episode! 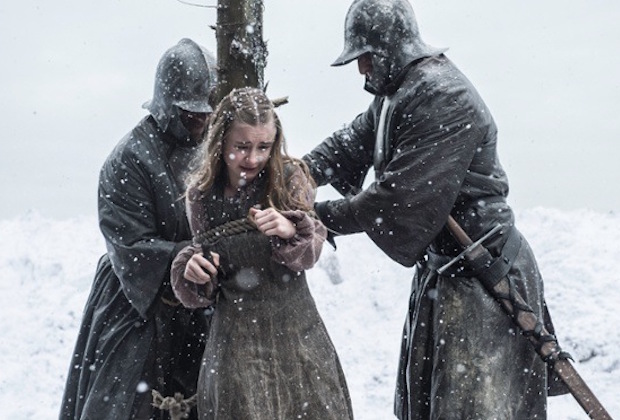