Arden Cho makes her long-awaited return to Teen Wolf this Tuesday (MTV, 9/8c), and although every other couple seems to be falling by the wayside, you’ll be happy to know that Scott and Kira are “still together.”

Those words come straight from executive producer Jeff Davis, who refers to the couple’s time apart as an “anxious separation,” one Scott is still “very worried about.”

“When we pick up with Kira, you’ll see just where Mexico has taken her to try to fix the problem of the fox spirit taking over,” Davis tells TVLine. As you’ll recall, Kira was going full-on Goku the last time we saw her.

Unfortunately, Kira’s isn’t the only familiar face we’ll be seeing. As teased in the trailer for Season 5B, an Oni demon will also rear its ugly head. (Meanwhile, Stiles just started puking himself up at the mere mention of Oni demons.)

“The Oni is part of a test that Kira goes through out in the desert,” Davis explains. 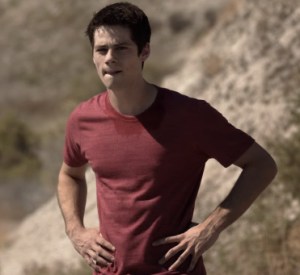 But because demons are scary and I’d like to end this on a high note, here’s some fun bonus scoop about Scott and Stiles from the Jan. 19 episode, which is “all about going off to the desert to get Kira back”: Per Davis, the episode will find the rocky best friends “reaffirming and strengthening their friendship. That’s a little bit longer of a reconciliation. We didn’t want to just patch things up in one episode.”

Teen Wolf fans, which are you more pumped to see: Kira’s return or Scott and Stiles’ make-up? Drop a comment with your thoughts on Season 5B below.