When promos for Teen Wolf claim that Scott’s pack will go “to hell and back” in Season 5B, they’re not kidding.

Everything we know about the second half of the season, which returns Tuesday at 9/8c on MTV, indicates that the gang will face its strongest, darkest threat yet — a “clash of titans,” as executive producer Jeff Davis tells TVLine.

For starters, 5B will bring a few familiar faces back to Beacon Hills, both friendly and unfriendly. As seen in the Comic-Con trailer, Scott summons Argent to help, but when the enemy becomes too much for him to handle on his own, he turns to the previous generation for assistance. (That’s right, we’re getting a visit from grandpa!) 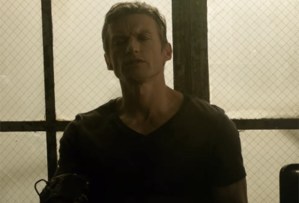 Deucalion will also rear his not-so-ugly head in the coming weeks; Theo turns to the self-proclaimed “Demon Wolf” for answers when a new enemy known as the Beast of Gévaudan — aka “history’s most vicious, most famous werewolf” — comes a-calling, though I think we can all agree that Deucalion wouldn’t help someone unless there was also something in it for him.

Romance-wise, there’s not a whole lot of good news to share; Malia and Stiles are (at least temporarily) on the outs, while Liam and Hayden’s relationship will continue to suffer as a result of her being part of Theo’s pack — and, you know, a chimera.

I do hope you’re a fan of the show’s occasional weird Lydia/Parrish moments, though, because there are a whole lot more of those in 5B, starting with Tuesday’s premiere. “In a way, they’re unconsciously bonded together by their supernatural powers,” Davis explains, adding that we’ll learn a lot more about Parrish’s hellhound side now that he’s “out in the open.”

Now, for a few key episodes to look out for:
* 511 (Tuesday’s premiere) reveals the fate of Sheriff Stilinski.
* 512 marks the return of Kira.
* 514 is a big episode for Malia and the Desert Wolf.

Teen Wolf fans, what are your hopes for Season 5B? Your concerns? Drop ’em all in a comment below.