NBC’s first three-way crossover between its Chicago shows kicked off with an eventful — and smoochy! — pair of Fire and Med episodes on Tuesday night.

There was a heavy mystery to solve as Firehouse 51’s rescue led the doctors to discover that a string of cancer-free women were given lethal overdoses of chemo.

But considering the bloody cliffhanger on Fire‘s last episode, you’ll have to forgive me for skipping over the case of the week and getting straight to Herrmann’s fate, as well as not one, but two big romantic developments.

FIGHTING TO LIVE | After several ups and downs and various complications, Herrmann survives the stabbing – but not before Dr. Connor Rhodes and Severide get into an argument about his medical care. The firefighter questions the doc’s treatment plan after learning from P.D.‘s Jay that his brother, Dr. Will Halstead, wouldn’t have waited so long to operate on Herrmann. 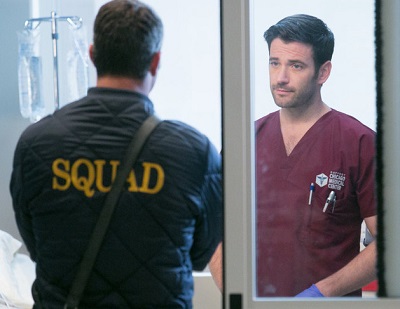 “You stay out of the O.R., and I won’t run into any burning buildings, OK?” Dr. Rhodes tells Severide.

“You just better hope he makes it,” Severide challenges him.

Meanwhile, Jay’s unhappy that his bro got him involved in this conflict, and Connor and Will’s already tense relationship isn’t getting any warmer. Basically, it’s a Chicago hunks testosterone-off, and I don’t hate it.

ANOTHER CHANCE AT ROMANCE? | Yaya DaCosta wasn’t kidding when she told TVLine that April doesn’t have any closure when it comes to Severide! I doubt she’ll be getting some anytime soon after their unexpected liplock in the crossover. Severide then asks April to dinner and she accepts. But when her brother Noah, who has just started working at the hospital, begs her to help him study, she cancels on Severide. “You’ve been putting him ahead of you your whole life,” the firefighter argues, pointing out that she should be the doctor and that she’s only working as a nurse to put Noah through medical school. They leave things on an icy note as April responds, “Thank you for your concern, but I’m fine, and I don’t need your advice.”

HE SAID YES! | Mouch is so shaken by what’s happened to Herrmann, he fumbles his first attempt at a proposal to Platt, who calls him out on the bumbling mess. During take two, he tries to explain his behavior. “You know how couples say, ‘That’s my better half?’ That’s Herrmann to me — friend version,” he says, to which Platt replies that she’s the one who needs to apologize. “You are the kindest and most honest man I’ve ever met,” she declares, adding that she would be “the luckiest girl on Earth” to call him her husband. And then she pops the questions to him! (Mouch, of course, accepts because, let’s face it, Platt is the best and he is the lucky one.)

Chicago fans, what did you think of the crossover’s big surprises? 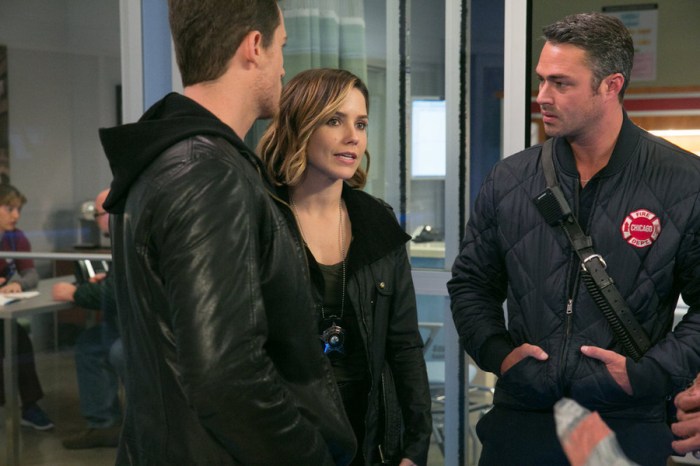