Question: Any new scoop on upcoming episodes of Chicago Fire?? —Alex
Ausiello: Just so you’re aware, Alex, double the question marks does not automatically result in double the scoop. But since I’m feeling generous, let’s give you two tidbits on which to chew. First, the tide may be turning for Severide — at least in the love department. “We have some things coming up romance-wise for him,” executive producer Matt Olmstead teases. On a second (and possibly related) note, Chicago Med‘s Yaya DaCosta told us she doesn’t think April got any closure on her feelings about high school pal Severide — even though the two hooked up on Fire last season. “They have a very long history, a friendship and sexual tension that has not been completely figured out yet,” the actress says. “So you’ll get to witness that.” 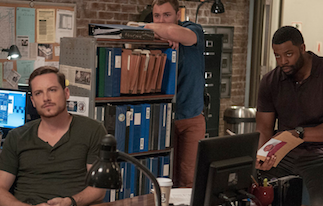 Question: Any scoop on the three-way crossover with Chicago Fire, P.D., and Med? I’ll take anything you have on any of the shows individually, too! —Dayna Goralnick
Ausiello: The franchise’s first three-way kicks off Jan. 5, when Chicago Fire responds to a call involving a comatose woman discovered in a burned-down apartment building. After learning she was on chemo, “we start digging into her case because we’re not sure if it was a suicide attempt,” P.D.‘s Jesse Lee Sofer previews. “We realize that she didn’t actually have cancer, and she was being poisoned with chemotherapy, possibly by a physician. Then the story transfers from Fire to Med to P.D., where we go on a manhunt for whoever was responsible for this. It turns out, there may be more cases.”

Question: Any scoop on Jake/Amy or on Brooklyn Nine Nine in general? – Lauren.
Ausiello: The happy couple won’t be welcoming Baby Peralta anytime soon, if that’s what you’re wondering. According to a rep for the show, Melissa Fumero’s real-life pregnancy will not be written in, and her Spring 2016 due date won’t pose any major production issues.

Question: How is the Team Free Will relationship going to be this season on Supernatural? We will see them working more together? –Beatriz
Ausiello: Let’s just say it’s complicated — and there wasn’t a lot that Misha Collins could reveal about the trio’s interactions during our recent set visit. “I feel like that dynamic where Cas is helping the boys and we’re going to solve problems is always a short-lived one,” Castiel’s portrayer shared. “Things, generally speaking, fall apart sooner or later and somebody is lying to someone else, and there’s subterfuge dissembling it and everything is sort of dysfunctional. So that’s where we’re heading.”

Question: I was wondering if you have any scoop on Castiel’s Supernatural storyline? —Zarah
Ausiello: Even in these times of Darkness, don’t expect the angel to act as middle man between the Winchesters and his brethren upstairs. “Cas is very much alienated from Heaven and its machinations,” Collins explains. “In fact, we learn — spoiler alert — that Cas is pretty much reviled by everyone in Heaven. He’s not involved, and he doesn’t have the inside scoop at all. He’s definitely not a conduit to Heaven in any way.”

Question: Is there is any word on Nyssa (Katrina Law) returning to Arrow? I would love to see her take what’s rightfully hers. —Christina
Ausiello: Though an air date for Law’s next appearance has yet to be set, “Nyssa’s stories are far from wrapped up,” showrunner Wendy Mericle assures. “She’s in Nanda Parbat, she’s been arrested in the wake of destroying the Lazarus Pit, and she has a score to settle with Malcolm Merlyn. We don’t intended to leave anyone hanging, including her!” 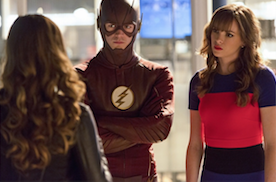 Question: Any word on when Caitlin will turn into Killer Frost on The Flash?—Sarah
Ausiello: Judging from what Danielle Panabaker tells us, her scientist’s chilly villainess side won’t emerge any time in the immediate future. “I’m super excited for Killer Frost,” the actress says. But unfortunately, “the writers have been pretty clear that it’s not going to happen as soon as I want it to.”

Question: Hi! Avid reader! Anything on the Flash/Arrow crossover? Cannot wait for it! Thanks! —Stephannie
Ausiello: Well, hello there, Stephannie. You represent the exact demographic of reader AA loves the best: Avid! So as a special thanks, I just want to make sure you’ve seen this and this. (Plus, we’ll have lots more #Flarrow scoop after this weekend’s fan screening!) In the meantime, can we interest you in a teaser about our favorite bromance? While Oliver and Dig continue to work together, “their viewpoints and strategy on how to deal with H.I.V.E. really come to a head,” star Stephen Amell teases.

Question: I am a Scandal addict, and I have convinced many of my co-workers to join in this cult. I’d love to hear some scoop! —Mary M.
Ausiello: If you’re excited about Olivia being moved into the White House, you may want to pay close attention to the look she had when Fitz made clear her new address. As Tony Goldwyn told Matt Mitovich of POTUS’ play, “It’s extreme and ill-advised, because putting Olivia in a box is not generally the wisest choice! But he’s desperate, and hopefully he can bring her around. So we’ll see how it plays out,” in Thursday’s fall finale.

Question: I think that Klaus and Hayley have some of the best chemistry on The Originals. Is there a chance for romance between them later down the line? I’m really not interested in the other pairings. —Nicole
Ausiello: Well, Nicole, before Klaus and Hayley can even think about a romantic future together, they first have to be able to stand each other’s company — a development about which Joseph Morgan doesn’t sound too confident. “The director of the episode we’re shooting now described Klaus and Hayley as being two people who really wouldn’t be in each other’s lives if it weren’t for Hope,” he says. “It was something that happened once between them. They’ve had numerous arguments, which would have been enough to make them say goodbye, but they can’t, because they’re both responsible for this little girl. They’re forced to make an uneasy peace, but their dynamic — like all of the dynamics on the show — is constantly in flux.” Does that answer your question at all? 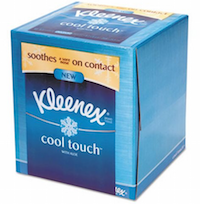 Question: What can we expect from the remaining Bones episodes of 2015? —@KATIARABREU
Ausiello: Get your Cool Touch Kleenex ready, Kat. The second half of the two-part fall finale on Dec. 10 will find one of our regulars sustaining a heartbreaking, unimaginable loss.

Question: Bummed about Wicked City‘s cancellation. Any plans for ABC to run the unaired episodes online? —Jocelyn
Ausiello: According to a network rep, a decision regarding the five remaining Wicked episodes has not yet been made. BTW, I’m told producers were able to add two additional scenes at the end of Episode 8 that will bring closure to the story. (Rumor has it the action will jump ahead six months in the wake of a major character’s death.)

Question: Big Devious Maids fan here. I have to know if Adrian survived the explosion. —Ashley
Ausiello: Well, I can’t tell you that, Ashley, but I can introduce you to two new characters coming to Beverly Hills in the show’s fourth season. Casting is currently underway for a twenty-something aspiring singer named Dani — who also happens to be a current character’s estranged cousin — and Evan, a dangerous-yet-handsome thirty-something who specializes in manipulating people. (But that’s all part of the job when you’re the manager of a famous movie star.)

Question: Anything on Vampire Diaries? —Kelly
Ausiello: Let’s see… I’m pretty sure this counts as “anything”: The show is currently casting a potentially untrustworthy new character named Alex, described as being warm-until-crossed. And here’s the really weird part: Alex apparently runs a “mysterious organization” that will soon be introduced. 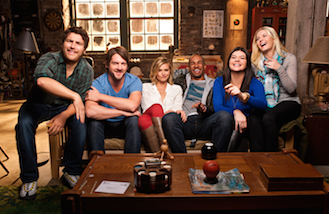 Question: Longtime reader (back to your TV Guide days), first-time writer. I like to credit you as the biggest contributor to the revival of Veronica Mars and Gilmore Girls. So thank you for your dedication! It would be a-mah-zing if you could focus on a Happy Endings revival next! —Kell
Ausiello: Funny you should make a Happy inquiry. I heard from a very reliable source that something Happy Endings related was percolating. But then a second, equally reliable source laughed off what the first reliable source told me, so now it’s gonna look like I ran your question because you said nice things about me. I can’t win!

This AAnd That…
♦ Homeland rant: I’m having a very hard time wrapping my head around the idea that Dar Adal believes Saul — his longtime friend and colleague — colluded with the Israelis to blow up that Syrian jet. I don’t care what unresolved issue they have from 30 years ago. It’s ludicrous and it’s impairing my enjoyment of the season. I also don’t buy that Carrie would blow off that hot German boyfriend of hers. On the bright side, Miranda Otto has been phenomenal as turncoat Allison.
♦ I’m a little late to the party, but I’m all in on Hulu’s funny-sweet-dark-dirty Casual.
♦ Scorpion is casting Sly’s (Ari Stidham) military-for-life dad, who has long struggled to connect with his genius son. Actors in their 50s who excel at playing hard-asses should contact their agents ASAP.
♦ On Tuesday, I attended the taping of NBC’s Adele concert special at Radio City Music Hall, but an embargo agreement prevents me from talking about it until closer to the Dec. 14 air date. But for the time being, it’s important that you know I was there.