The CW’s Arrow and The Flash are going all-out for their second major crossover event (airing Dec. 1 and 2), which will launch the midseason spinoff DC’s Legends of Tomorrow, and the efforts are earning high praise from their respective stars.

“These two crossover episodes standing together will probably be, in my mind, the pinnacle achievement for both shows,” Arrow leading man Stephen Amell raved during a set visit last month.

“It feels even bigger,” The Flash‘s Grant Gustin adds. “I feel like more people are a part of it this year from both sides, and we’re tying in Legends, obviously, so it’s just bigger.” Or as his co-star Danielle Panabaker sums it up: “It’s crazier. It’s nuts, but it’s great.”

Here’s what else we know about the superhero-filled episodes:

IT’S A TRUE ‘TBC’ EVENT | If you’re only going to watch one-half of the two-part extravaganza, you might want to rethink that plan. Whereas last season’s crossover event was designed so that one could enjoy the episodes independently, “It’s not the case this year,” Amell says. “If you put them back-to-back on one night, they would run like one two-hour episode of television.”

THERE WILL BE CITY-SWAPPING | The action kicks off on The Flash when Vandal Savage (guest star Casper Crump) attacks Kendra Saunders, forcing Barry to take the Jitters barista/Hawkgirl to Star City so that Team Arrow can hide her. Thus, “most of the Flash episode takes place in Star City, and most of the Arrow episode takes place in Central City,” Amell previews. “We have a common villain [in Vandal], which was not the case last year. And, just in general, we’ve done an excellent job of weaving not just two shows, but three shows together,” Legends included.

BARRY’S GAL IS SITTING THIS ONE OUT | “Sorry, fans,” says Candice Patton, but Iris is “actually not involved at all. I know that’s quite a disappointment to a lot of people, but she’s not involved in the crossovers that we have explored thus far. It doesn’t mean that we won’t ever see that. We know that crossovers have been extremely popular in our universe … so I’m sure we’ll have more.” Also not having much to do during the upcoming event: Joe West and Captain Lance. (Guess you don’t need cops when you have… Legends.)

THERE WILL BE NEW DYNAMICS | “One of my favorite parts about the crossover is that you get to see people that you wouldn’t otherwise see interact” have scenes together, Carlos Valdes shares. “That sort of creates a mysticism, like fireworks about it 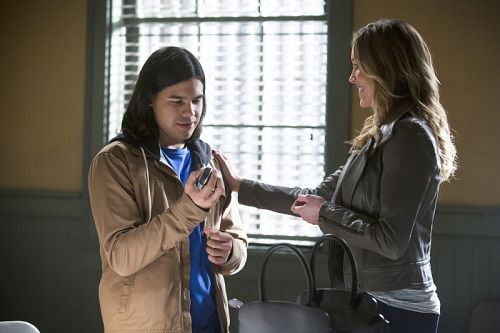 . So fans can definitely expect a lot of new relationships to blossom, and new interactions to arise.” And what about some more exchanges between Cisco and his crush Laurel/Black Canary? After all, Team Arrow needs some help from the S.T.A.R. Labs crew with a weapon powerful enough to destroy Vandal Savage. “No comment,” Valdes responds with a laugh.

THERE’S NO SHORTAGE OF COSTUMED CRUSADERS | Some leather-clad crimefighters may be missing in that above photo. We only count seven present, but “we shot a scene… that had, like, nine superheroes in it,” Amell describes in awe. “Nine people with either powers or supersuits. It was an amazing thing to look out over the scene and see the world that has been built over the course of three-plus years.”

THE CRIMSON COMET RETURNS | Although Jay Garrick “does not have interaction with the crossover characters, he very much has a story,” Teddy Sears reports. Per the official Flash episode synopsis, Harrison develops a serum to help Barry run faster, and asks Jay to test it out. (Hmm, could someone be getting their superspeed back?) Yet it’s a different character Sears wishes he had a scene with during the two-parter. “My first job was on a soap opera, One Life to Live, with Brandon Routh (who plays Ray Palmer/The Atom),” he shares. “We both were hired about the same time, and fired about the same time for probably being equally as terrible and not really knowing what we were doing. So I was hoping that we could to have some stuff, just ’cause I haven’t seen him in a long time and it could be really funny.”

Arrow/Flash fans, what are you most looking forward to during the crossover?