If you’ve never thought about Carson and Mrs. Hughes having sex, Sunday’s Downton Abbey season premiere probably came as a bit of a shock.

But for those of us who have waited impatiently for the Abbey’s hottest will-they-won’t-they duo to strip down and get to business, it was a welcome relief to see the couple finally having “the talk.” Unfortunately, that relief wasn’t shared by poor Mrs. Patmore, who was made an unwitting go-between in the lovebirds’ sexual confusion.

Her clumsy attempts to ask Carson whether he planned on boning his new bride were made even more uncomfortable by Carson’s apparent refusal to take even the slightest hint. It all worked out in the end, though, with Mrs. Hughes declaring, “If you want me, you can have me,” before going in for a kiss worthy of that Virgin Diaries special on TLC.

(All kidding aside, I love these two, and their happiness is all I need from the show’s final season.) 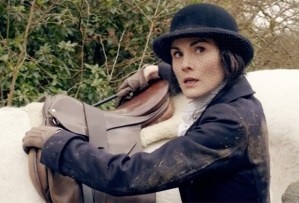 UNBURIED SECRETS | Speaking of sex, Lady Mary “Don’t Tell Me to Ride Sidesaddle” Crawley found herself blackmailed by some irrelevant trollop who claimed to have intimate details of her and Tony’s stay at that no-tell hotel from last season. Mary was prepared to take a “don’t feed the animals” approach to the situation, but Papa Crawley knew better than that. In fact, the occasionally lovable lunk managed to completely flip the script, threatening to expose her for blackmailing Mary. (Enjoy those 50 pounds, ya nut job. Don’t spend ’em all in one place!)

FREE, AT LAST | Anna and Bates were finally cleared of suspicion in the murder of Mr. Green, and everybody seemed thrilled for them — even Molesley, who you know couldn’t give less of a damn. That said, the show’s most harrowed pair is hardly out of the woods. (Not that they’ve ever been out of the woods. Heck, I wouldn’t be surprised if they decided to pitch a tent and camp out there for the rest of the season.) Anyway, the Bates’ latest drama is that Anna fears she’ll never be able to carry her husband’s child, something she’s apparently attempted many times already. Sad!

ODDS & ENDS:
* I want to get invested in this “Andy” fellow, mostly because I think he has a respectable first name, but I learned my lesson with Jimmy. The pretty ones never last.
* Carson isn’t even pretending to want Daisy around anymore.
* I miss Tom even more than I thought I would.
* I don’t miss Rose exactly as much as I thought I wouldn’t.

Fellow Downton-ers, your thoughts on the final season premiere? Hopes for the rest of the season? Grade the episode below, then drop a comment with your full review.