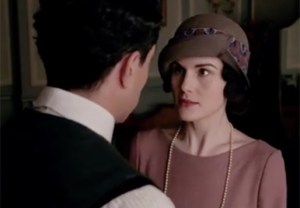 This week’s Downton Abbey is rated R — for responsible!

Not wanting to commit to Tony without first taking him for a test drive, Mary asked Anna to go to “the village” and pick her up a condom. At least, I think it was a condom; neither woman could bring herself to actually say the word aloud. (Update: It was a diaphragm!)

Of course, she might need a whole lot more protection than that if Tony makes good on his promise of all-night love making. (And what a naughty little speech that was.) But here’s my question: Do contraceptives protect against sudden, inexplicable death? Because Mary’s currently 2-for-2 in the dead lover department.

DON’T BE JELLY | Speaking of relationships being tested, a “very brown” man (Mary’s words) by the name of Simon Bricker arrived at Downton this week, immediately wedging himself between the lord and lady of the house. Robert tried to downplay his jealousy by accusing Simon of courting Isis (“There’s nothing more ill bred than a man trying to steal the affections of another man’s dog”), but everyone — including Cora — knew he was really upset by Simon’s “flirting.” The question is… Will Cora really tell him to stop?

CAN YOU FEAR ME NOW? | But this week’s real dramatic conflict came from the introduction of a “wireless” to the Abbey. Of course, this being 1924, I’m referring to the wireless radio Rose practically bullied Robert into buying in order to hear the voice of King George. Carson was particularly concerned about the device — I believe the word “corrupted” was bandied about — but even he caved (I think) upon hearing the king’s speech.

PLAN B(ABY) | As promised, Mr. Drewe came up with a brilliant plan to allow Edith to spend more time with Marigold, naming her the child’s godmother. Mrs. Drewe objected, as she is want to do — “Marigold already has a godmother,” blah, blah, blah — but Edith was thrilled to finally have a bigger place in her daughter’s life. (Hopefully this will also end her arson streak.)

THE R-WORD | Can we talk about Carson and Mrs. Hughes for a minute? Like any good Downton fan, I’ve wondered about their unspoken connection since Day 1 — especially after that beachside hand-holding — but even I was surprised when Mrs. Hughes suddenly/finally dropped the R-word this week: “Every relationship has its ups and downs.” Was she speaking about their professional relationship… or something more? What does it all mean?!

* Thomas and Jimmy’s goodbye was actually kind of heartbreaking. They’ve come a long way since Thomas surprised him with that game of Sleeping Beauty, and I’m really going to miss their friendship. (Confession: I giggled at “I’m sorry to see the back of you.”)

* On the flip side… Baxter and Molesly? Like there isn’t enough going on in this house already, do we really need to invest in their romance, too? Come on, now.

* I was kind of enjoying Bates being on the back burner for a bit. Now that the police are asking questions about Mr. Green’s death, does that mean we’re in for another season of Bates’ legal woes? I don’t know if I can take that.

* Just when you start to forget how far in the past this show takes place, Isobel Crawley starts talking about this new thing called “insulin.”

Your thoughts on this week’s Downton? Drop ’em in the comments section below.