The return of Ms. Rubel, aka “Trubel,” in Grimm‘s fall finale introduced viewers to a changed version of the baby Grimm, someone who’d spent her time away from Portland training to be a weapon of Wesen extinction in the coming uprising.

Oh yeah, and she has some pretty cool toys now, too.

When TVLine chatted with series creators James Kouf and David Greenwalt, we wondered whether Trubel’s souped-up motorcycle was the first indication that Trubel was going to have an arsenal of sophisticated technology, courtesy of the mysterious collective known as Hadrian’s Wall.

“Don’t we wish,” Greenwalt said, laughing as he cited budgetary constraints. “It’s expensive and cumbersome, the things that we want to do with that sleek bike. There’ll be a little bit of it, but there won’t be the big, James Bond-like action sequences that we envisioned when we created it.” 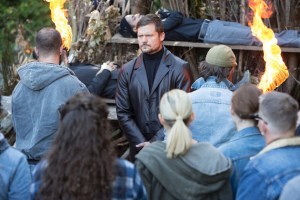 The EPs gave up few details about what the upcoming Wesen war would look like, offering only that “there’s a lot of complicated things… that intertwine before direct confrontation,” Kouf said. But we did get them to give us a quick sketch of Lucien Petrovich, the Wesen revolutionary played by Longmire‘s Bailey Chase, who debuts in the NBC series’ midseason premiere.

“He’s a pure believer, but he’s got a streak of deviousness in him and he can’t really be trusted, even by his own people,” Greenwalt said, adding that Petrovich might not be above sacrificing some of his own soldiers if needed. “He’ll be around a little bit.”