Just as we had begun to wrap our heads around last week’s Hank Henshaw reveal, Supergirl raised its game Monday night with a super-eventful fall finale.

An intense face-off between Kara and Astra that gave way to one of the season’s most emotional scenes? Check. The SuperFriends coming together to take down a CatCo adversary? Check. Cat Grant’s “A-ha!” moment regarding Kara’s real identity? Check!

Before you share your reactions in the comments, a brief rundown of the jam-packed episode:

* Facing the very real possibility that her Aunt Astra wants to kill her, Supergirl trains with Alex in hand-to-hand combat and tries to convince herself that if the time comes, she will end Astra’s life. But when that moment does arrive, and Kara has the chance to (literally) heat-vision her aunt out of existence, Kara doesn’t. Instead, Astra is taken to the DEO, where she is put in solitary confinement and tearfully explains to Kara that Alura Zor-El — Kara’s mom —  was the real enemy on Krypton.

The CliffsNotes version: When Astra and her husband, Non, began to use unorthodox methods to save Krypton from ecological suicide, Alura had them both imprisoned in Fort Rozz — and, worse yet, Alura manipulated Kara into dragging Astra out from hiding so she could be thrown in jail. (Is it cold in here, or is it just Alura’s icy betrayal?) 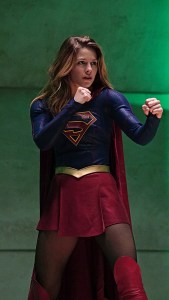 * But juuuuust when it starts to seem like Astra is the more trustworthy Laura Benanti character, Alex and Hank make a major realization: Astra’s confinement at the DEO was merely a distraction for the main event — the invasion of Lord Technologies by Non and a whole slew of other Fort Rozz aliens. By the time the DEO agents get to Maxwell Lord’s domain, Non and his minions are wreaking havoc — and even though Supergirl gets there in time to save Alex, we’ll have to wait until after the winter hiatus to see how Supergirl’s tussle with Non ends.

* Elsewhere in National City, Cat Grant gets hacked — and, thanks to Kara’s super-hearing, we learn that Dirk Armstrong, CatCo’s chairman of the board, masterminded the cyber-attack in an attempt to unseat Cat from her media empire.

While James and Winn comb through Cat’s e-mail archives, searching for anything incriminating that the press might use against her, they stumble across monthly wire transfers that Cat has been sending to one Adam Foster — her son, she reveals to Kara. Cat lost custody of Adam when he was young, after her ex thought she was too career-focused to raise a child. But rather than bring Adam into a media firestorm due to the hack, Cat agrees to step down from CatCo if it means protecting her son…

* …that is, until Winn, James and Lucy present Cat with the very evidence she needs to get Dirk arrested, ensuring that Cat sits atop the throne for at least a while longer. #TeamSuperFriendsFTW

* Oh, and speaking of Cat: She knows Kara is Supergirl, at long last. Proving that she is just as observant as we all hoped she was, Ms. Grant confronts Kara with all of the strange “coincidences” that have aligned her with Supergirl in recent weeks. Kara tries to brush off the similarities — because awkward conversations are definitely Kara’s forte — but when Cat asks her assistant to remove her glasses, it can’t be denied. “Thank you for all the help you’ve given me, Supergirl,” Cat tells Kara — and once again, the scenes between these two ladies might just be the best of the episode.

Your turn! What did you think of Supergirl‘s fall finale? Grade the episode via our poll below, then hit the comments to back up your choice!