Warning: The following article contains major spoilers for Episode 7 of Supergirl. Read on at your own risk.

So that’s why his eyes glow red.

After spending the first six Supergirl episodes skulking around in the shadows of the DEO and leading us to believe he was an enemy of the Danvers family, Monday’s installment found Hank Henshaw finally revealing his true identity: J’onn J’onzz aka The Martian Manhunter.

(Gold star for those of you who already assumed this in our comments section. Your bragging rights expire in 24 hours!)

A major character in DC lore (and an original member of the Justice League of America), J’onn J’onzz is also an alien, though he looks decidedly different from Kara. He’s an enormous, green-skinned Martian (with a good heart!), and the decision to make him a part of the CBS drama was a major one, according to executive producer Andrew Kreisberg.

“Within the body of the Supergirl series, there is a Martian Manhunter series rolling throughout,” Kreisberg tells us. “It fit in with how Supergirl has been evolving. She’s embraced her powers and stepped out into the light, and in a way, J’onn is closeted and afraid. He’s one of the most frightening-looking Justice Leaguers, but he has the purest heart.”

Now that J’onn’s identity is (somewhat) out in the open, read on for the Supergirl team’s insights on how it will affect the series:

MARS ATTACKS | Though Kara will of course remain Supergirl‘s focus, J’onn’s backstory will be crucial to upcoming episodes. As non-comic-book-reading viewers will come to learn, J’onn had a family and a life of his own back on Mars, before a war between the White Martians and the Green Martians caused most of the latter race to be eradicated in a fire. 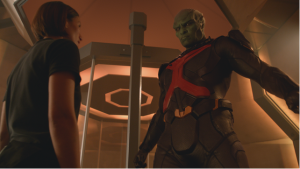 According to David Harewood, the man behind J’onn, Episode 11 will reveal his character’s past, and it will be quite the evocative outing. “It was a very emotional episode, just thinking about the whole idea of genocide and people being burned alive,” Harewood teases. “It’s going to be a very emotional and powerful episode, and fans will be really delighted to see it.”

FAMILY MATTERS | As Alex and Kara come to grips with the idea that J’onn isn’t actually Hank Henshaw, they will develop a relationship with Harewood’s character that the actor says will be quite enjoyable for viewers. “Having lost his own children, [Jonn’s] got a lot of pain and melancholy, which is fantastic to play. These two girls represent something that’s very close to him,” he reveals.

Adds Chyler Leigh: “Up until [Episode 7], there’s the question of who Hank is and how much he knows about our past and our family. There’s tons of mistrust, a lot of questions and not a lot of answers. But [J’onn] looks at Alex almost as if she’s one of his children. There’s so many wonderful moments between the two of them when he says, ‘You’re very much like my daughter.'”

IDENTITY THEFT | That’s not to say J’onn will be completely comfortable in his own skin anytime soon — in fact, quite the contrary. J’onn will be hesitant to use his many powers, especially since he isn’t quite as easy on the eyes as Kara.

“That’s very uncomfortable, because he realizes that Kara is beautiful and blonde and gorgeous, and I’m this 7-foot, green martian,” Harewood explains. “As much as I want to just be myself, it would terrify people to be confronted with this ape. Seeing Kara enjoy revealing her true nature — there’s something about that where the Martian Manhunter is a little envious, because he can’t quite do that.”

That said, Harewood said he is enjoying playing his shapeshifting character, who won’t always take the form of Hank as the season progresses. “As you’ll see in episodes to come, there’s a lot of fun to be had,” he hints. “He can be whoever he wants to be, so I think you’ll find me being other members of the cast at various points of the story.”

Supergirl fans, how do you feel about the introduction of J’onn J’onzz? Did you know Hank’s big secret all along? Tell us in the comments section!