Now that the dust has settled (too soon?) after Quantico‘s perilous midseason finale, it’s time to address a few unresolved moments from Sunday’s episode.

What’s with Raina’s disappearing act? How will Caleb move forward after Shelby’s rejection? And did Liam make Alex’s ball drop on New Year’s, if you know what we mean?

Read on for some scoop from executive producer Joshua Safran.

DID ALEX AND LIAM HOOK UP ON NEW YEAR’S EVE? | After all, the NAT and the broken older agent got very cozy at the end of Sunday’s episode. “You will find out in the next couple of episodes what happened,” Safran says. “It’s answered very quickly — it’s just not necessarily answered in [Episode] 12.” 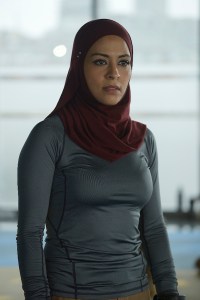 QUANTICO TIMELINE? | Raina’s slow fade to the background is a product of the sisters revealing themselves as twins, Safran says. “Nimah became the favorite of the group because she had more in line with everyone else, and Raina had different viewpoints… It’s just been more and more that she feels pushed to the side.” Whether she fill that distance with love for a dangerous terrorist leader remains to be seen…

DOES BREAKING UP WITH SHELBY SEND CALEB OFF THE DEEP END? | “It’s going to be very hard for him,” Safran says. “She breaks his heart, which he’s not expecting, and the next time you see him is at the bank, where they say they were expecting him weeks ago.” Young Haas’ presence at Bomb Site No. 2 is “a little bit of a key to where he’s going emotionally,” the EP teases. “When it’s clear that [Shelby] does not feel safe around him, that is very hard for him to take.”

What burning questions do you have after Quantico‘s fall finale? Tell us in the comments!