This Tuesday on The Flash‘s midseason finale, Iris dropped a truth bomb while The Trickster traded in a far more lethal kind. Plus, at episode’s end, Zoom played, “Let’s make a deal” with a familiar face.

One thing is for certain: Fans of Iris West this week got perhaps the biggest gift of all, as after instances of a scene here and there not making it to broadcast, Miss West was well accounted for, leaning on Barry, for a change, to help her through a difficult time.

For amidst the joy and cheer of Central City’s holiday season, Iris decided she couldn’t keep bottled up inside anymore the secret she’s been keeping, that her mother had a son, Wally. Barry advises iris to tell Joe the truth, that it won’t kill him. Besides, she won’t have to do it alone, as Barry will be at her side.

Suffice to say, the bombshell 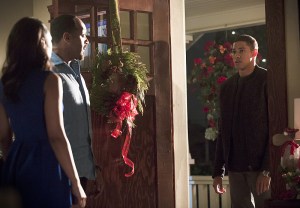 blew Joe back some. As he would later share with Barry, he feels guilt for having turned his back on Francine all those years ago, unwittingly leaving Wally without a father figure, someone to throw a football with. “That poor boy paid the price” for Joe’s self-preservation, he sadly observes.

Joe winds up reconnecting with Francine (off-screen) and learned that he needed to forgive her, for everyone’s sake. And at episode’s end, the West family Christmas celebration grows by one head when Wally comes a-knocking, recognizing it’s probably a bad time, but welcomed nonetheless, with open arms.

The villainy of the episode left me a bit, yes, cold, though not for any lack of (enormous) zeal brought to the proceedings by Mark Hamill. The Trickster is just so unhinged, he is almost uninteresting. Almost. Captain Cold was on hand for only a bit and seemingly just to set up his not-a-hero heroism in Legends of Tomorrow, though I appreciate that his cold gun now has a dead man’s switch.

And while this marked The Flash’s third tussle with a weather Wizard, that particular baddie’s presence was more in service of the Patty character, offering her a chance to “legally” exact revenge for her father’s murder during a bank heist. But when Patty is presented with 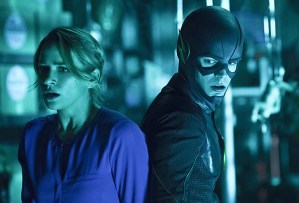 — and jumps at — the chance to put Mardon down, The Flash (whom she had clamped down with the metahuman trap, ouch) counsels/begs her not to, coming oh-so-close to divulging his identity in that effort.

Patty heeds the speedster’s advice to not let Mardon take any more from her than he already has. Afterward, she shares with The Flash that which she was unable to confide in boyfriend Barry — that she actually holds herself responsible for her father’s death, because it was her skipping out on her job at the shoe store than landed Dad at the bank that fateful day. Later, at the West home, Patty hints to Barry that she is ready to open up to him about her difficult past. After he puts on his matching reindeer sweater.

Taking a cue from Joe, Barry was also in a forgiving mood, “telling” Wells (or at least his out-of-earshot Earth-Two counterpart) that he cannot let his hate for our Harrison inhabit his heart anymore, if he is to have the happiness that the post-mortem video said would forever elude him. So, Barry forgives his Wells.

His opinion on “Harry,” though, seems destined to change for the much worse.

For in the final tag, we learn of the deal that Zoom has been trying to broker with Wells. As the scientist has surmised, the sinister speedster wants The Flash to get faster and stronger — “You’re fattening him up like a Christmas goose!” — because Zoom plans to rob The Flash of all his power. And Zoom wants Wells to help him do it. In trade, Harrison’s daughter Jesse will live. And after giving Wells a quick taste of what a reunion with his daughter can be like, Wells signs on. “I’ll do it,” he agrees. “I’ll help you steal The Flash’s speed.”

What did you think of “Running to Stand Still”?