Warning: The following Q&A contains major spoilers for the Scream Queens season finale. If you haven’t watched, turn back now.

A few words of advice to all future Kappa Kappa Tau sisters: When a serial killer starts terrorizing your campus, you should definitely turn a suspicious eye on the sorority member who’s obsessed with death.

In the second hour of Tuesday’s two-part Scream Queens finale, Lea Michele‘s Hester was revealed to be the other baby in the bathtub and the mastermind behind Wallace University’s Red Devil killings. (For a full recap of the season ender, click here.)

And if you were among the viewers gasping at Tuesday’s big reveal, you’re in good company. Michele herself was shocked to learn her macabre-loving character was the culprit, a discovery she made while reading the script for the finale.

“I really wasn’t thinking I was the killer at all,” Michele tells TVLine. “Having a relationship with [co-creators] Ryan [Murphy] and Brad [Falchuk] and Ian [Brennan] for so many years, I really thought they would’ve told me. So the fact that they didn’t tell me anything made me think, ‘OK, I must not be the killer then.’ But they didn’t say a word! It was so crazy to me.”

Below, Michele reveals to TVLine the characters she suspected were behind the Red Devil mask, the perils of filming the season finale and what it has been like to play the antithesis of Rachel Berry.

TVLINE | When did you find out you were the killer?
I found out when I got the final script. I had no idea leading up to it. I just read the final script and when she says, “It was me all along,” I just went, “Oh. My. God.” I was really excited and, moreso, happy to know that she got away with it.

TVLINE | There was a recent episode when you got pushed down the stairs, and we assumed you were dead for at least a while. Was that a situation where you had to go to Ryan Murphy and say, “Am I off the show?!”
Oh my God, of course. The minute I got pushed down the stairs, I called Ryan and was like, “Am I dead?” And he said no, and I was like, “Thank God.” I didn’t want to die. I wanted to stay on the show, and obviously was having the most incredible time. Every time something happened, like with the shoe [through Hester’s eye] or falling down the stairs or finding out that I was the killer, Ryan certainly got a text or a call from me. 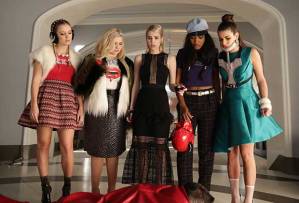 TVLINE | Were you suspicious of any other characters before you found out it was you — maybe even Hester herself?
I definitely thought it was either Skyler [Samuels’ Grace] or Oliver Hudson[’s Wes]. But I guess I was wrong. [Laughs]

TVLINE | Grace did seem so innocent. I suspected it was her for quite a while.
They both did — this wholesome, father/daughter thing. But Wes did seem a little off to me. He’s not really the most model father, so I thought there was something to that.

TVLINE | How often did you play Hester as though she was the killer, even though you couldn’t know for sure?
Moreso not. We always just played it [straight], and then occasionally, they would say, “OK, now say that line like you’re the killer, or do this scene a little bit more evil.” They really only told me to do that twice. I really just played it more like I was obsessed with Chanel, I was obsessed with Kappa and just happy to be there.

TVLINE | Let’s talk about filming the finale. You have so much dialogue, especially in the scene when the Chanels get arrested.
I don’t even want to think about that! [Laughs]

TVLINE | How long did that particular scene take to film?
That was hard. That scene was so big, we had to take two days to shoot it. I had a fever of 102, I was so sick and it was so late at night. I was just like, “Everybody bear with me.” And I really pride myself on being good with my lines, but this was a lot because it was all facts. You really couldn’t ad-lib or go outside the box at all. But I think I did a pretty good job, and Brad said, “Just pretend you’re a lawyer. You’re a lawyer stating your case.” It took a while to memorize everything, and it was certainly not the easiest day of filming, but I was so happy when that was done. That wasn’t the last day of filming, but that felt like the last day of filming. [Laughs] I went home and drank half a bottle of wine with my mother. I was so happy.

TVLINE | The scene with you and Jamie Lee Curtis at the end is so fun, when they both know each other’s big secrets. Did you guys rehearse that before filming?
No, and that was another tough one, because we were literally in the center of the Tulane [University] campus. We had probably 100 kids surrounding us while we were filming this very important scene, and I was just like, “I don’t want them to hear what I’m saying. What if they hear me tell her that I’m the killer?” And then on top of that, it’s Jamie f—king Lee Curtis. That was one of those moments in life where I tried to take a mental picture and remember it forever, because it was such an incredible honor. And it really was such a smart scene in that it’s nose-to-nose, super-intense and then, out of nowhere, “OK, see ya! Bye!”

TVLINE | When you first signed on to Scream Queens, you were all about making a departure from Glee’s Rachel Berry. Did you get from this experience what you wanted to?
I think so! [Laughs] Once you tell someone to attack your crack, William McKinley High kind of went that way. [Gestures out the window]

TVLINE | And yet, there are some similarities between Rachel and Hester, in that they’re so driven toward their goals — even if one of those goals is killing people.
I tried very hard, with everything from the way I did my hair and my makeup and what I wore — literally, if it was a pair of shoes that were similar to something Rachel wore, I would not wear them. I worked with the same wardrobe and same hair and makeup people as Glee, so we were able to really make sure that it was very, very different. There is that sense of determination, but at the end of the day, Hester is literally on another planet.

Scream Queens fans, did you have Hester pinned as the killer all along? If not, who did you suspect? Hit the comments with all your finale thoughts!