Ho, ho… whoa nelly do we have a problem on our hands.

The Mindy Project closed the first half of its season Tuesday with a Christmas episode that left us feeling more The Family Stone and less It’s a Wonderful Life: After flashing back to her first week at the OB-GYN practice, Mindy realized once more that she’s been allowing Danny to bar her from going after her dreams.

So while he and Leo slept, she snuck out to measure her old apartment — which hasn’t sold yet — to see if Leo’s crib will fit in what used to be her closet. It will, and the realization that she was contemplating leaving Danny and moving out made her weep on the floor of her empty flat. At the very end of the episode, she crept back into bed with Danny, who pulled her close.

The closing scene certainly gave the sense that our girl had made a big, tough decision — and not a moment too soon, I say.

Before you fling flaming Diamond Dan thongs at my head in protest, hear me out. No one wants Danny and Mindy to have their happy-ever-after more than I do. I boarded this ‘ship back at that first hand-grab-during-turbulence in Season 1, and I’ve been buckled in tight ever since. 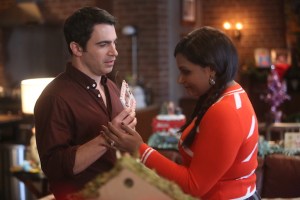 When Drs. Lahiri and Castellano finally hooked up in the airplane galley in Season 2, former TVLine editor Meg Masters and I had a kvelling session that lasted far too long and rehashed the event in far too much detail for us talking about people we do not know who don’t actually exist.

Or the Empire State Building declaration of love? I died, revived, sprinted up 86 flights of stairs and then died again. Of HAPPINESS.

And last season, when Mindy told Danny she was pregnant with Leo? And he reverently cooed, “We’re a family?” With the belly-palming? And the Beyoncé?! Are you kidding me? Only a monster would try to keep these two apart, right?

But here’s the thing: Every time Danny talks about how Mindy should want to stay home and raise their brood, he takes a lint brush to the warm fuzzies I have regarding their relationship. One or two of these mentions makes sense; he’s a conservative curmudgeon, and it fits. But his relentlessness on the topic this season goes beyond “funny character quirk” and spreads dangerously into “I don’t really know my fiancée at all.”

Because Mindy’s pride in her work has been there all along; even in the series pilot, in which most of her life is a messy pile of bad hookups and too much booze, she’s a badass baby doc when it comes to handling a tricky breech birth. For Danny not to know that — or worse, to disregard it because it doesn’t fit his preconceived notion of gender roles within his marriage — is troubling in the extreme.

Which brings me to my unhappily made point: If Danny isn’t down with the Mindy-that-is instead of the Mindy-he-envisions, maybe it’s time for a change. Temporary? Permanent? Who knows?  All I’m sure of is that I sincerely hope these two weirdos end up together — in a relationship where both of them can achieve their long-held dreams (and have lots of kinda inappropriate sex).

What are your thoughts on the state of The Mindy Project‘s central couple? Weigh in via the poll below, then hit the comments to elaborate!