By now, you’ve likely seen the promos for Adele‘s one-night-only show at Radio City Music Hall, which will air Dec. 14 on NBC (10/9c). And from those previews, you know that her gown was beaded, her beehive high and her presence royal — absolutely fitting for a diva celebrating her triumphant return to the pop music scene.

What TVLine can tell you (because we were lucky enough to get a seat in the audience), is that the siren’s voice is exactly as honeyed, powerful and stunning live as it sounds on her new album 25, which dropped soon after the special was taped in November.

We’ve pulled together a few fun facts and behind-the-scenes bits about the special,  Read on for the setlist, the celebrity fans and the chanteuse’s best audience banter.

HELLO, IT’S ME | Adele opened with “Hello,” 25‘s first single. The crowd broke into loud applause at the first chorus and gave a standing ovation at the end of the tune, which caused the British singer to smile broadly.

MAKE YOURSELF COMFORTABLE | After the upbeat “Water Under the Bridge,” Adele told the crowd “I’m so nervous!” But the jitters weren’t apparent as she teased fans in the very first rows (“Those are good seats! Those are better than my seat!”), offered tips about live television (“Obviously, this is going to be on the TV, so don’t pick your nose”) and took off her shoes (for comfort) as she confessed that Radio City was one of her “bucket-list venues.”

OLD STUFF | The hour-and-a-half performance (which will be trimmed for the hour-long special) included older numbers like “One and Only,” “Chasing Pavements,” “Set Fire to the Rain” and “Skyfall” — and she’d only performed the Bond theme once before, at the Oscars.

JE T’AIME | The performance of “Hometown Glory,” one of Adele’s first hits, was punctuated with various cityscapes projected on the walls and ceiling of the venue. “We love you, Paris,” Adele said afterward, in recognition of the terrorist attacks that had taken place in France days before. 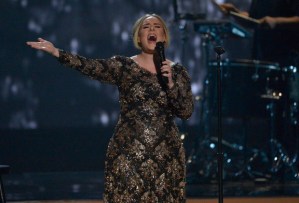 SAY WHAT? | Some choice bits from Adele’s unscripted non-singing moments:
* “I’m sorry. I’ve got gas, because I’m nervous.”
* “It’s not like Drake or nothing!” — quelling audience excitement after she announced a “surprise” that was coming up in a song (it turned out to be a dramatic stage entrance for the string section)
* “I took my nails off, and now I’ve got potato fingers.” — before picking up a guitar to play “Daydreamer”
* “I do make lovemaking music.”

THE BIG ONE | Just before launching into “Someone Like You,” Adele stopped the band and made it clear that boyfriend Simon Konecki, father of her son, is the reason “I don’t sing this from the same place anymore.”

ENCORE! | Adele’s final set included a stripped-down sobber called “Million Years Ago” and “When We Were Young,” which she called “my favorite song I’ve ever written.” The audience’s standing ovation on the latter seemed to genuinely surprise her, and it brought her to tears. She closed with a driving “Rolling In the Deep,” telling fans that nerves normally make her blank out while on stage. But that night, “I’ve remembered every moment.”