Whether you’ve been an angelically good kid all year or you’ve already eaten all of the chocolate out of your advent calendar, director Sofia Coppola has an early holiday gift for you: behind-the-scenes details from the Netflix Christmas special, starring Bill Murray, she directed, co-wrote and co-produced.

A Very Murray Christmas, which premieres Friday on the streaming video service, finds the Ghostbusters alum playing himself and feeling very Grinchy as an epic snowstorm derails his plans to perform a holiday show that’ll be broadcast live from The Carlyle hotel in New York City.

During a conversation with Mitch Glazer (Magic City), who’s a friend of both Murray’s and Coppola’s and who co-wrote and produced the hour with the pair, “I said, ‘I just want to see Bill do a week at the Café Carlyle, singing old standards. I just love when Bill sings,'” Coppola tells TVLine. Over time, the idea grew and changed, “and somehow it turned into a holiday special.”

Having access to the storied Manhattan hotel — where Marilyn Monroe and President John F. Kennedy reportedly canoodled and where filmmaker Woody Allen has a weekly jazz gig — was crucial, Coppola says: Everything in the special, save a dream sequence filmed on a soundstage in Queens, was shot on site.

Click through the gallery below to hear behind-the-scenes scoop on the special — in Coppola’s own words — including details on George Clooney’s flawless entrance and Miley Cyrus’ on-the-spot save. 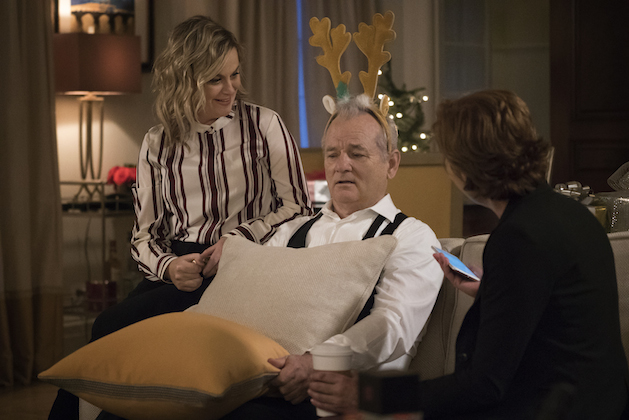