When your family gets on your last nerve this holiday season, be grateful that at least you’re not lying about British Jews and making up the concept of underprivileged lawyers in order to impress your battle ax of a mother — like Rebecca does in this week’s Crazy Ex-Girlfriend.

The series’ fall finale finds Mrs. Bunch arriving in West Covina to celebrate Hanukkah with her only child, but the festival of lights is anything but joyful or fun for either of them. Mama Bunch nitpicks, complains, kvetches and generally makes Rebecca feel like a failure for not meeting her mom’s extremely exacting standards. All of this weighs heavily on Rebecca, who hopes that her mother is there to finally give her a family ring she’s long coveted.

So the lawyer does what she always does: She lies with abandon in order to impress someone whose opinion she probably shouldn’t consider so much. She pretends that Whitefeather & Associates is a charity where she mentors “underprivileged lawyers.” She says she practices law at a really observant Jewish firm that’s closed for Hanukkah. And she asks Paula to pretend to be someone fancy — Paula interprets this as “a Jewish woman from London” — in order to convince Mrs. Bunch that “My life is just filled with winners.”

Let’s take a small break to deal with what’s going on with Greg. As the barkeep complains that he has to attend an annual holiday dinner with his mom, stepfather and teen half-siblings, Heather — who’s working as an elf at the mall — decides that she’d like to go to the meal with him. But when they get there, Greg’s mom is Mel from thirtysomething and she’s nice and awesome. The entire family is great, actually —  but, as Heather points out, Greg’s the one being a major grinch. So once they work through a few things (like Greg’s crushing sadness at his mother leaving his dad), the situation gets a lot better. And later, when Greg flirts with Rebecca’s Manic Panic’d neighbor, she kisses him. I did not even know this ‘ship was in port, but tell you what: I’m buying a ticket! 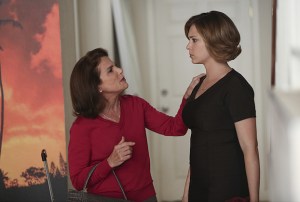 After Mrs. Bunch throws herself at Calvin and gives Rebecca a vase (though not the ring), the Bunch women are walking the mall when they inadvertently stumble upon Josh Chan performing in the high school hip-hop group’s Winter Wonderland gig. (It’s a whole thing… that boils down to the fact that he maybe finally realizes he’s an adult man and no longer a teen bro.) Mrs. Bunch gives Rebecca a hard time for moving to California for her camp boyfriend, and Rebecca counters that her mother should want to see her happy.

“Happy? What’s happy? That’s a term for stupid people,” Mrs. Bunch says, starting to cry as she adds that she wants Rebecca to be a survivor — and the fact that she fought back against her mom proves that she is. Pretty soon, they’re both sobbing and embracing, then Mrs. Bunch leaves to go back home. (Side note: The scene is just as messed-up and touching as it sounds.)

Then, all that’s left is for a big number about Christmas in California! While that’s happening, I’d like to point out that Tovah Feldshuh killed it in this episode, Vincent Rodriguez III must have springs in his feet, and “A bishop in Wisconsin said something anti-semitic/so the temple has decided to boycott cheddar cheese” is one of my favorite Crazy Ex lines all season. Happy holidays to all!

What did you think of the episode and the first half of the season in general? Sound off in the comments!