Let’s hope you’ve recovered from your turkey-induced tryptophan coma, because this week’s Quantico requires all of your wits (and a stuffing-sized serving of suspension of disbelief) to keep abreast of what goes down.

Alex is tortured without having one hair on her pretty head touched. Shelby and Caleb are publicly a couple (can you guess in which timeline?). Liam spends a lot of time at the bottom of a bottle. Charlie is still missing. And Simon has a burger with someone who knows way too much about serial killers.

And that’s only about a quarter of the insanity. Read on as we review what happens in “Guilty.”

SOUSED AND SOAKED | At Quantico, Liam hasn’t shown up for work in a week — since right after Alex confronted him about the secret he and her father were keeping, and since Miranda was attacked in her house. (She’s OK, by the way. We’ll get to her in a minute.) Parrish sneaks away to make sure that Liam, whom you’ll recall has a drinking problem, hasn’t pickled himself; Ryan is irked that Alex keeps choosing to do things other than spend time with him, so he follows her.

While Ryan skulks in his car outside, Alex enters O’Connor’s house and finds the veteran agent passed out in his boxers in bed. “I did this way too many times with my father, but I’ll only do it once for you,” she says, ignoring the alcoholic fumes he must be giving off as she hustles him into the shower and turns on the water. (Side note: Liam doesn’t deserve such a nice rainfall showerhead, right?)

PROFILES IN INSANITY | Onto the week’s lesson, brought to you by visiting lecturer Dr. Susan Langdon: “What is your truest self? What do you really want?” Though she’s using Oprahspeak, she’s talking about serial killers — people who are their truest selves when ending their victims’ lives. She’s an FBI profiler known for bringing in a man known as the Welfare Mom Killer, and she’s written a book that Simon seems to know by heart.

Langdon’s exercise has the NATs looking at serial killer crime-scene photos and using the criminal’s profile to discern which scenario is a fake. But Simon’s group can’t decide: Two photos in their file don’t match the profile. Simon disagrees with his classmates about which picture is planted, but majority rules and Langdon confirms that the group’s choice was correct.

Still, Simon can’t let it go. So when everyone goes to the bar that night — at Langdon’s invitation — he continues to ask the profiler about details of the night she arrested the Welfare Mom Killer. But Langdon has got a better idea: a drinking game based on the number of victims a serial killer has! Woo! That’s totally normal and well adjusted, right? NO. This is not a fun way to blow off steam, NATs. THIS IS A GIANT RED FLAG THAT HAPPENS TO COME WITH VODKA. 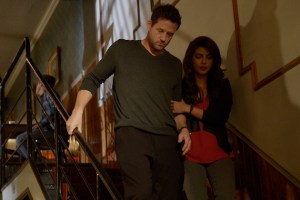 NOBODY LIKES A SAD DRUNK | Alex swans in long enough to get all cozy with Ryan; next to them on the dance floor, Caleb and Shelby are canoodling so hard they look like a pile of golden retriever puppies. But Alex abruptly makes to leave when a woman calls from a bar and says that Liam is soused and needs a ride home. Ryan gets pissy that his kinda-girlfriend is running off to help the man who has been messing with their lives. “You know this isn’t you or him, right?” she says as she leaves. And when she finds O’Connor once more drunk, he is at turns teary, angry and messed up over what happened to Miranda — but is he playing Alex, like Ryan thinks he is?

KILLER INTELLECT | Back at the bar, Langdon is enjoying a burger at a back corner booth while Simon peppers her with questions about the MWK crime scene in question: He thinks the body was moved; she swears it wasn’t. Her frustration grows as he won’t give up. “Maybe you did it,” he jokes… and then quickly realizes that she probably did fake evidence in order to bring in the killer she was tracking. And before you can say “we’ve got 10 minutes to wrap this up!,” she’s marching Simon out into the parking lot with a hypodermic needle pressed to the base of his skull (poised to give him the embolism she threatened earlier, I’m guessing? And while we’re asking questions: Did anyone else think for a minute that Langdon was actually the killer? And isn’t that really not that preposterous a theory, given how odd the character is and how quickly she swung from normal to nuts?).

Ryan is the only one who notices his classmate getting pushed out the door and follows them. Knowing that she’s out of luck, Langdon plays it off like a failed hookup and whispers “You’ll never prove it” as she kisses him and then drives away. Days later, some of the recruits as watching TV coverage of Langdon’s arrest — for falsifying evidence — and Simon proudly tells them it was his doing: He called the police to tell them about the night at the bar. But instead of congratulations, Simon’s fellow NATs vilify him for contributing to the freedom of a serial killer… and the anger he feels drives him to meet up with the Israeli bomb specialist who’s been calling him. After railing against how the FBI isn’t interested in doing the right thing, Simon accepts a flash drive from the man: the blueprints to every train station in New York.

Also (because it doesn’t fit neatly anywhere else): The FBI thinks that Charlie was kidnapped, and that someone else — not him — stabbed his mom. Nathalie admits to Shelby that she has a daughter, and Clayton calls Caleb with the news that the sister to whom Shelby has been wiring lots of cash may not exist. So… who was that woman on Skype last episode?

TEAM ALEX GROWS | In the present, right after Alex turns herself in, Liam stops the agent Mirandizing her; he cites a “public safety exception” and has her thrown in the bowels of Grand Central. Elias (hi, Elias!) shows up as her lawyer, thanks to a call she made before turning herself in, but he’s too late to stop the High Value Detainee Interrogation Group (or HIG) — which answers only to the president and can do whatever it wants to get information — from whisking Alex away to an undisclosed location.

So while Alex is missing, the rest of her fellow NATs — including Caleb and Nathalie, who both come around to Team Alex this episode — work to figure out Alex’s whereabouts on the morning of the bombing (to try to prove her innocence to the higher-ups). Using security camera footage and the like, they realize she disappeared in a “blindspot,” or a tiny area where no camera caught what happened.

Long story short: Alex was grabbed, chloroformed, stuffed in a duffel bag and taken via taxi to a hotel near Grand Central, where her kidnapper checked in under an assumed name and probably dumped her body in the rubble around the time of the blast. And the woman who had Alex’s access card and could possibly ID the terrorist(s)? She’s dead — and made to look like she was found in the bomb’s aftermath, but her phone is missing…

A REAL RIB-TICKLER | Meanwhile, Alex puts up a tough front for the HIG guy, until he marches her into a room where Ryan is strung up like a goose ready for roasting. HIG intercepted the helicopter, Ryan’s wound is festering and he’s going to be in a really bad was soon — but if Alex talks, the HIG dude says, Ryan will get the care he needs. And when Parrish hesitates, HIG dude sticks his paws into Ryan’s side and wiggles his fingers like a birthday-party magician. Alex screams and sobs.

There are a lot more Ryan’s-wound-related moments that make me a little queasy, but we’ve all still got leftovers in the fridge, and I wouldn’t want to ruin your appetite by relating the torture here. So let’s just say that Alex is thisclose to saying whatever HIG guy wants her to when Liam and a team of agents busts in and shuts it down. Later, O’Connor apologizes that it took him so long to believe her, adding that all of her classmates will be reinstated as soon as the charges against her are dropped. But he points out that the terrorists likely thought Alex would be caught and would stay that way; if she’s freed, they may not carry through with their plans for a second bombing. And since the FBI now has a bit of a lead, maybe she wouldn’t mind playing along for a while?

So at the end of the episode, we see Alex in an orange jumpsuit, appearing before a judge and pleading guilty to the bombing.