Though Monday’s installment of the CBS drama seems to take a giant step backwards, storytelling-wise, it’s merely the result of last week’s decision to swap “How Does She Do It?” with “Livewire” in the wake of terrorist attacks in Paris.

So let’s all pretend, for the next few paragraphs, that we don’t already know James and Lucy are going to rekindle their relationship, or that Hank is up to some funny business at the DEO, or that Cat will eventually take a liking…ish to Kara in future episodes. For now, let’s focus on the most recent hour, in which Kara finds herself pulling the most stressful kind of double duty.

The task at hand for Kara: babysitting Cat’s super-shy son, Carter, when Cat must attend an awards banquet out of town. The task at hand for Supergirl: saving National City from a series of mysterious bombings, all while she’s seemingly being spied on via drones. The jobs are simple enough on their own, but together… well, that’s where things get tricky.

With a little help from the DEO, Kara learns that the suspected bomber is Ethan Knox, a disgruntled former employee of Maxwell Lord’s, whose daughter fell ill shortly after he was fired. (Considering the bombs have been made from material developed by Lord Technologies, the profile makes sense.) It seems Ethan’s next target is the launch of Maxwell’s high-tech train, which will have thousands of people on board when Ethan detonates the bomb strapped to his chest — even worse, a second explosive device has been planted at National City’s airport to create a diversion. Great. 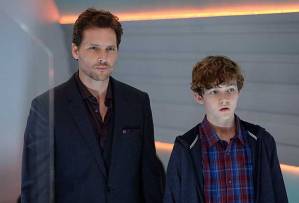 Not even Supergirl can be in two places at once, so Kara decides to handle the train crisis while the DEO attempts to disarm the airport bomb. (Long story short: Hank is able to stop the explosion in time… because his yet-to-be-explained laser vision and super-strength allow him to rip open the bomb and deactivate it. Handy!) Meanwhile, Cat’s son sees on the news that Supergirl is attempting to thwart a bomber downtown, and since Carter is basically in love with Supergirl, he takes it upon himself to leave the CatCo offices and head to the train launch himself, if only to get a glimpse of his crush up close.

The last act of the episode is a bit of a whirlwind: Carter makes his way onto Maxwell’s train, as does Ethan, but Kara tracks down the bomber before he can end anyone else’s life. She tries to convince Ethan that killing thousands of people isn’t the way to do right by his sick daughter, but it falls on deaf ears. The best Ethan can do is compromise — he’s still going to blow himself up, because he can’t bear the thought of his daughter seeing him on TV as a killer, but if Kara can separate the train cars with her heat vision, the bomb won’t hurt anyone else by the time it goes off.

Kara and Ethan both hold up their ends of the bargain, but something isn’t sitting right with Ms. Danvers. The next day — once Carter has been safely returned to his mom and thousands of civilians have gotten home unscathed — Supergirl pays a visit to Maxwell and tries to understand how Ethan’s suicide mission does anything to help his ailing daughter.

And whaddaya know? Despite denying his involvement in any of the bombings, Maxwell ultimately reveals that he was behind all of them — and why? He was testing Supergirl. The bombings, those strange drones — it was all in an attempt to see how agile and strong Supergirl really is. And the tests did reveal one thing: The fact that Supergirl chose to save the train rather than the airport — where a lot more people were at risk — indicates that someone important to Supergirl (i.e. Carter) was on board the train, and that could very well be a clue to Supergirl’s real identity. And judging by Maxwell’s ominous, “The fun is just beginning” sign-off, he won’t be letting go of this hunch anytime soon.

Elsewhere in the hour, James and Lucy continue to circle their inevitable reconciliation. James thinks he was dumped because Lucy is obsessed with her career, Lucy insists it was because of James’ Superman obsession, yadda yadda yadda. On and on it goes, until Lucy decides to fly back home when it seems they’ve reached a dead end. It isn’t until later, when James learns of the airport bomb threat, that they realize how much they still care for each other. He races downtown to make sure Lucy is safe, and when she exits the airport unharmed, their decision to get back together is a no-brainer. (See, Kara? That friend zone you’ve kept Winn in for months isn’t so fun after all.)

OK, your turn. What did you think of Monday’s Supergirl? Tell us in the comments!