CBS has pulled Monday’s originally-scheduled episodes of Supergirl and NCIS: Los Angeles in the wake of Friday’s terrorist attacks in Paris that left more than 130 people dead. 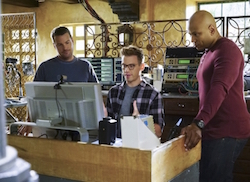 Different episodes of each series will air instead. According to a CBS insider, the move was made “out of sensitivity and respect to the events that occurred.”

The scrapped Supergirl episode. titled “How Does She Do It?” had Kara dealing with bombings throughout National City. It will be replaced by the Thanksgiving-themed “Livewire,” which was originally scheduled to air the following week. Meanwhile, the ditched NCIS: Los Angeles outing, “Defectors,” involved ISIS recruiting young women. The Dec. 7 installment “The Long Goodbye,” will air in its place.