To paraphrase The X-Files‘ Mulder from the Season 2 episode “Duane Barry,” I know you’re scared, X-Philes, and that you’d like to see this all come out right.

After all, Fox’s revival of the alien-obsessed series is a William-magnitude blessing that has the possibility of becoming a black oil-esque curse: What if it’s just not as good as we want it to be?

After a few screenings earlier in the year, the network has released the premiere episode to the media. I’ve seen it. And rather than print up a special edition of The Lone Gunman, I’ll just tell you here:

You won’t be disappointed.

Now, because Fox will send black helicopters piloted by mutated bees my way if I reveal too much, the following teases are intentionally vague. (Sorry, but I saw what happened to Marita Covarrubias. NO THANKS.)

The following nuggets of intel, though, should help ease the wait before the revival’s Sunday, Jan. 24 premiere. And remember: The truth is… well, you know the rest.

* Just in case you’re an X-Files newbie who happened to read this far in the post, good news: The series does an excellent job of briefing everyone on the big takeaways from the previous nine seasons.

* The credits and theme music, as promised, remain the same.

* As previously reported, Mulder and Scully are no longer together romantically at the start of the continuation but the former agents also aren’t at “Never Again”/”Why don’t I have a desk?” levels of animosity.

* No one has forgotten about Scully and Mulder’s son, William.

* Mulder spends a full scene looking like a kid in an intergalactic candy store. 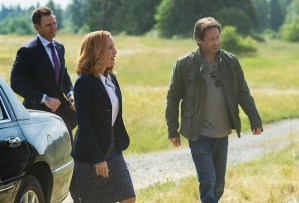 * It’s weird how not weird it is to watch Joel McHale play a non-comedic role.

* Mulder makes a giant leap to a conclusion. Mulder gives a lecture. Long story short: He hasn’t changed AT ALL.

* After one verbal excoriation, you’re going to put the word “claptrap” into heavy conversational rotation.

* There’s a subtle callback to the series’ pilot.

* There are at least two explosions.

I can hear the Men in Black approaching, so I’ll stop there. But hit the comments with your predictions/thoughts/feelings about Mulder and Scully’s upcoming return!