Not every Thanksgiving dinner involves neck-snapping and body-bargaining — but then again, not every family is the Mikaelsons.

Klaus and Elijah invite Aurora, Lucien and Tristan to their compound for a Turkey Day feast on Thursday’s The Originals (The CW, 9/8c), and as Joseph Morgan explains to TVLine, “things escalate rather quickly.”

“We have them over for this lovely Thanksgiving feast, probably prepared by the servants we never see, although Klaus did make the stuffing,” Morgan says. “Then Freya shows up, and in a very Mikaelson fashion, she proceeds to act like a bull in a china shop. At least one neck is broken.”

Below, Morgan passes down more Thanksgiving teases, as well as his own thoughts about Klaus’ future with the (now three!) women in his life:

TVLINE | Let’s start light. We’re getting a lot of flashbacks this season. Do you have a favorite flashback wig that you’ve worn?
I like the one that I’m using for the flashbacks this season. I try not to make it too neat, I like when there’s a little bit hanging down in the front. I try to inspire [our hairstylist], like, “Today, we’re going for the romantic lead in a novel.” He goes, “OK,” and he crafts something wonderful. At the moment, I’m really enjoying this one.

TVLINE | Klaus has also had plenty of physical confrontations already this season. What was harder, the big fight with Hayley or with Elijah?
Physically, the fight with Elijah, because I was doing more. With Hayley, I just kind of stood and took it after a while. [Laughs] She got all her aggression out; although it contained a physical element — with vampires moves, jumping from balconies, and so on — I think that fight was more emotional. [Phoebe Tonkin] had the lion’s share of the work, so I know she was pretty exhausted.

TVLINE | Klaus has been spending a lot of time with Aurora. What do you like that about their relationship?
We talked on numerous occasions, [Julie] Plec and [Michael] Narducci and I, about Klaus having little to no love interests in the first two seasons. I always thought that if there was going to be a woman in his life, it would be quite a destructive relationship — it would have to be someone primal who could challenge him on every level. I feel like that’s what they’ve done in creating Aurora. On top of that, they have this huge history, including a past betrayal by Elijah, so we’re really able to draw from the past. Present-day Klaus and Aurora are very different from past Klaus and Aurora, so it’s fun to play those differences, as well.

TVLINE | Since he is spending so much time with her, is he putting other love interests out of mind?
Not actively, but I suppose you can’t help but concentrate on what’s in front of you. Klaus deals with the enemy at the gates, so that’s kind of the way he’s feeling about this, as well. But no one’s being forgotten here! All of these characters are planets spinning around the sun, which is Klaus. [Laughs] 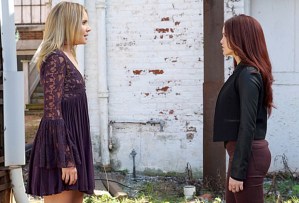 TVLINE | Can we hope that Klaus might intervene and save Cami from Lucien?
I mean, it would be a damn shame if he doesn’t, wouldn’t it? All of the stuff between Klaus, Cami and Aurora is going to come to a head in the next few episodes. Don’t forget, Aurora and Cami haven’t even met yet, so that’ll be an interesting conversation.

TVLINE | What can we expect from a Mikaelson Thanksgiving?
It’s going to be a quiet affair with a nice, calm dinner. Everybody arrives, has a lovely time and heads on their way. We hold hands around the table and give thanks for each other. … No, wait, that’s another show. But it does start out very cordial, with Elijah and Klaus on their best behavior.

TVLINE | And I imagine he’s still not too thrilled about what happened to Rebekah.
Oh, no. [Laughs] That’s no good at all. The end of Episode 6 saw him learning that her body had been stolen, so it’ll be interesting. These dinner scenes take forever because there’s five of us around the table; there’s a lot of subtext and motives, metaphorically under the table. It’s a lot of fun to play that: Aurora has Klaus’ sister, in turn betraying her brother, Klaus and Elijah are turbulent, Klaus and Aurora have an unresolved romance — so, yes, a classic Mikaelson Thanksgiving.

What are you thankful for this season, Originals fans? And how do you hope all of this madness resolves itself (or doesn’t)? Drop a comment with your thoughts below.