Imagine that the American flag flying over your home, your school and your town park had a large swastika where the stars should be.

The violent incongruity of that visual, executive producer Frank Spotnitz says, is emblematic of — and often seen in — his new Amazon series, The Man in the High Castle.

The hour-long drama, which is loosely based on the Philip K. Dick novel of the same name, is set in an alternate reality 1962, where the Allied Powers lost World War II. Japan rules the West Coast, Germany oversees the eastern half of the country, and the no man’s land in between is a lawless swath known as Cannon City.

As production took place, the show’s team realized that “the real power is in taking symbols that mean a lot to us, and showing how they’d be altered under Nazi occupation,” says Spotnitz.

The similarities are “just so close, but slightly off, that it makes you uncomfortable,” he adds.

At the heart of the story is the Man in the High Castle, a mysterious figure who produces films that relate history as we know it: V-E Day, V-J Day, the raising of the flag at Iwo Jima, etc. His reels offer hope to members of the anti-occupation resistance… and make the fascists in charge rather nervous.

TVLine chatted with Spotnitz and cast members Alexa Davalos (Angel), Luke Kleintank (Bones) and DJ Qualls (Supernatural) about what to expect from the revisionist history series, which will be available in its entirety on Friday.

WHO’S WHO | Davalos plays Juliana, a woman living in California who becomes an unwitting member of the resistance after her sister passes her one of the Man in the High Castle’s movies… and then is fatally shot in the street by police. Assuming her sister’s spot, Juliana travels to Cannon City for a vague rendezvous; that’s where she meets Kleintank’s Joe, who’s smuggling intel for the resistance (and keeping one whopper of a secret about himself.) Qualls is Ed, the best friend of Juliana’s significant other Frank, who works in a metal shop and dabbles in conspiracy theories.

THE MORTIFYING IN THE MUNDANE | “People have a hard time relating to this, because what you think of as Nazis now, [they’re] terrible,” Kleintank says, noting that some of the characters in High Castle are just ordinary people who’ve pledged themselves to the occupying forces in order to survive. “We’re creating whole new worlds.”

PULLING PUNCHES | Though the subject matter seems like it would mesh well with Amazon’s looser-than-broadcast guidelines, “We don’t really go over the top with violence, nudity or sexuality at all,” Spotnitz says. “I think there’s something in our culture now that’s unfortunate, that people are enjoying torture, and I didn’t want to do that, especially with subject matter like this. Really, to me, it’s the psychological [angle] that is more powerful than the overtly violent or graphic.” Qualls, for one, is glad. “There was a scene that I had in an early draft where I was stripped, and they cut it,” he says, laughing. “It was also in a cold, wet place. And there was no way to come off manly in a cold, wet place when you’re naked.” 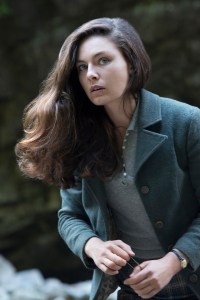 YOU’VE GOT THE LOOK | Davalos credits the series’ “extraordinary” costume designer Audrey Fisher with creating period outfits (like Juliana’s structured overcoat, pictured at right) that make it easy to get into character. “Wearing those clothes,” the actress says, “you step in, and you’re there.”

EYES WIDE OPEN | At one point in the premiere, Joe witnesses some Nazi cruelty firsthand. (We won’t tell you what it is, because the scene is most powerful when you’re caught by surprise.) Even though he’s grown up in an occupied state and is well aware of what the German forces are capable of, Kleintank says his character “is taken aback by it, because he’s never seen it before.”

X MARKS THE SPOTNITZ | Spotnitz, who wrote and produced some of The X-Files‘ most iconic episodes, has scattered a few Easter-egg references to the soon-to-be-revived series throughout the High Castle landscape. (The shipping company for which Joe drives, for instance, is called Lariat — a shout-out to Mulder and Scully’s preferred rental car company.) But don’t expect one in every episode, the EP says — there are “just enough to make you smile.”