This week on The CW’s The Flash, a surprise visitor helped Barry put his best foot forward, as Grodd came swinging by town again.

Unlike Bruce Wayne, Barry Allen recovered significantly quicker, if not entirely, from his broken back, as the action picked up again this week. (Meanwhile, poor Patty is told that her beau is nursing a nasty cold, to which she advises him to “stay off his feet,” #TooSoon.)

With The Flash temporarily sidelined, Wells chooses a lousy time to announce that he’s heading back to Earth-Two, to take care of Zoom once and for all. Luckily, Caitlin intervenes and convinces him that to attempt such, by his lonesome, is surely a suicide mission that will do Jesse no good. Whereas if he sticks around, Team Flash can help take down Zoom and thus save Jesse, on our turf. 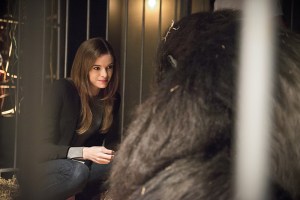 because he will be needed now that Grodd is back in town, compelling people to steal serums and such. He even targets Caitlin, for the purpose of bringing her to his bell tower hideout and asking for a refresher on how he became the way he is. She explains the particle accelerator explosion, then suggests that the chemicals he stole maybe could recreate the effect. Though she is taken aback upon realizing that what he wants to do is making more Grodds.

Barry meanwhile is stumbling, literally, in his physical rehab. As he explains to Joe, he is feeling tremendously unworthy of the key to the city, having been exposed by Zoom to everyone as an unworthy hero. After Barry shuffles away, defeated, Iris tells Joe she knows just the person to get through to him.

Later, Henry shows up at S.T.A.R Labs, a sight for sore eyes, based on the way Barry warmly smiles at Iris, for the thought. After eyeballing his son’s promising charts, Henry says that he just got back from camping — where he learned that “sometimes you have to slow down to get back to where you want to be.” Hint-hint. Picking up on Barry’s sense of shame, Henry then relates his own tale, of a man charged with killing his own wife, in front of their son. The key, he says, is t learn to believe in yourself again,

Back on the Grodd front, the great ape is tracked to the bell tower, and the plan is to have “Harry” don the Reverse-Flash suit and pose as Grodd’s “father.” And after a quick coaching session on “creepy” from Cisco, Wells just about pulls it off — until he “asks” that Caitlin be allowed to leave. “Father never ask, father take!” bellows the beast. After getting swatted across the room, Wells comes to and jabs Grodd with a bunch of drugs, facilitating his own escape.

The team then decides that rather than kill Grodd, they can lure him into a breach, sending him to the closest thing to “home” on Earth-Two. To pull that off, Barry is coaxed back into his supersuit. And despite letting flashbacks of his Zoom beat-down distract him long enough to get thumped some, he bounces back and punches Grodd into the portal, where on the other side the beast lands in… Gorilla City?!

Elsewhere in the episode:
* Cisco is tasked with fitting the speed suit into a ring a la Reverse-Flash. Luckily, Wells knows a thing or two about microtechnology.
* Cisco bails on his first date with Kendra Saunders upon “vibing” a vision of a “birdman.” Later, after he apologizes, they kiss — at which point he “sees” that his vision is her, as Hawkgirl.
* Barry confesses to Patty that he was not sick, but spending time with his ex-con father.

What did you think of “Gorilla Warfare”? Grodd’s little trip there is totally going to bite Team Flash in the butt one day, right?