The last time Supergirl viewers saw Kara Danvers, her heart had just cracked a bit at the sight of James Olsen with his ex, Lucy Lane — his beautiful, kind and intelligent ex, no less.

In tonight’s episode of the CBS drama (8/7c), the titular heroine’s love life will have only gotten more complicated. In fact, because the network opted to reshuffle its episode order and air “Livewire” in place of “How Does She Do It?” — a choice made in the wake of Friday’s terrorist attacks in Paris — James and Lucy will have (spoiler alert!) already rekindled their relationship.

Jenna Dewan-Tatum, who plays Lucy, is all too aware that her character’s presence in National City may cause those nascent James/Kara sparks to fizzle out — but for good reason.

“There’s a lot of unfinished business [between James and Lucy],” Dewan-Tatum tells TVLine. “There’s a lot of unspoken feelings. Her motivation, when she comes back, is to right her own wrongs. She didn’t end things well with him… and she knows she made a mistake, so she goes to get him back. I found that really empowering as a woman.” 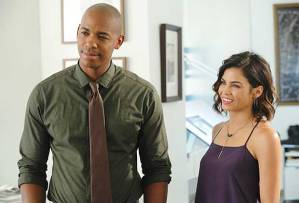 And even though Kara will want so much to hate Lucy — as will James/Kara ‘shippers, probably — Dewan-Tatum hints that it will be difficult for Kara to hold a grudge. “[Lucy is] really sweet to her, and she says, ‘I want to be your friend.’ There’s a warmth to her that’s really hard to fight,” she teases. “There’s an inherent friendship between them that Kara can’t deny.”

Of course, that doesn’t mean Kara’s budding feelings for the CatCo art director will actually go away. But according to Dewan-Tatum, this inevitable love triangle won’t feel as though it’s been done before.

“What I love is that [the writers] are really about making the James/Kara/Lucy triangle unexpected,” she says. “I’m not coming into town to play this bitchy, icy woman that just wants to ruin the relationship that everyone wants to be together. I hope people will understand and get invested in this relationship, rather than [seeing me as] just the foil for the two of them. It takes on a life of its own, which is also really empowering.”

Speaking of empowering, don’t expect to see Lucy glued to James’ side during her stay in National City. Dewan-Tatum says Lucy will be seen quite a bit outside of said romance, as the series explores “the relationship with my father, General Lane [played by 24‘s Glenn Morshower]… and a relationship with Cat Grant. It definitely isn’t one-noted.”

As for whether Lucy will find out about Kara’s caped alter ego, Dewan-Tatum will only say: “As far as we know, she has no idea. But Lucy’s a very smart girl.”

Supergirl fans, are you looking forward to seeing Dewan-Tatum as Lucy Lane? Is she the right girl for James? Hit the comments with your thoughts!