Even incredibly attractive FBI recruits who somehow make blue Henleys look sexier than their birthday suits have days of reckoning, and boy — is this week’s Quantico one or what?

The NATs and anaylsts undergo difficult physical and written exams in the episode, which ends with a few of them leaving the program. Meanwhile, in the present-day storyline, Ryan gets shot. AGAIN.

Read on for the highlights of “Go.”

GETTING TESTY | As if the recruits weren’t under enough pressure already, now they learn that they’ve got to undergo an exam that determines whether or not they’ll continue at Quantico. Brandon struggles during the pull-ups section of the physical test — and seems to have had troubles in other areas — but he’s not the only one having a tough week.

Take Shelby, for instance, who embarrassedly meets Caleb’s dad after she storms into her hook-up’s room and reads him for filth for no-showing at their boiler-room booty appointment. Or Caleb himself, whose FBI bigwig dad tries to pay him off to drop out of the academy. (Don’t worry, Caleb: I’ll give you extra credit for that Great Santini reference alone.) Or Ryan, who’s getting the bitchiest of cold shoulders from Alex in light of her learning that he’s already an FBI agent. Or Simon, who’s still really bitter about the twins’ revelation (though Miranda’s offer to remove his probation in exchange for his silence helps ease tensions a tiny bit).

All this to say, no one’s in a great mood when they all sit down in the lecture hall for the written exam. And when they all receive a sheet of blank paper and a pencil — and Miranda leaves the room, saying the test has begun — they’re stymied.

BOMBING THE EXAM | The situation devolves quickly. Using what they’ve learned about evidence, surveillance and the like, the NATs realize that Brandon didn’t get an exam. When pressed, he said he figured that was his signal that he’d been cut from the program and then, seeming a little unhinged, he takes off.

Right after he leaves, the room goes into lockdown and Elias finds a suspicious looking timer under Brandon’s chair. Alex is all, “Guys, this is just part of the test,” and holds onto that theory longer than anyone else in the room. Even when the group interrogates Nathalie (Brandon’s bed buddy), who mentions that he’d been acting squirrelly and skipping his meds, and even when they find a bomb in the lectern. 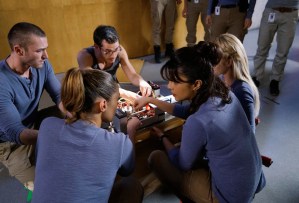 SOME GAVE ALL | Elias panics and suggests that Simon can disarm the device, thanks to his IDF training. Simon grudgingly agrees, but when he accidentally trips a secondary trigger, the doors unlock… but the bomb’s timer speeds up. Elias and a bunch of others run out like they just heard the ice cream man’s bell, but Simon, Alex, Shelby, Ryan, Nimah (or is it Raina?) and Caleb stick around.

It’s a good thing Alex was right — the whole scenario, Brandon freakout included, was part of the test. And the fact that the core group was willing to literally throw themselves on a bomb to save everyone else = very high marks.

GOODBYE, FAREWELL AND TWO MEN | In the aftermath, Ryan confesses to Alex that the oft-referenced Chicago event “was a blown sting” in which Liam messed up but Ryan took the blame, and because Booth was in such a tight spot, he had to accept taking on Alex as a case when Liam asked. “You had no choice,” she realizes, softening a bit before waltzing into Liam’s office, showing him the bugs she planted and agreeing to ignore everything she heard/saw if he’ll give Ryan his badge back. So he does, and the newly reinstated Special Agent Booth takes off without saying goodbye.

Shelby thinks Caleb has done the same, but when she finds him, he happily tells her that he’s been re-accepted as a NAT. They celebrate with a big blonde hug.

And Simon finds Elias packing his bags; because he bailed on the exercise, he has to leave Quantico. “You’re a man who saves everyone, and I’m a man who runs from a firecracker,” the ex-analyst says tearfully, and Simon is pretty broken up himself as he tries to make Elias feel better. Then they’re super close, and they’re crying, and they’re chastely kissing, and I am shocked by how moving I find this entire scene.

Elsewhere: Miranda outs the twins to the rest of their program. Gasp!

TROUBLE, DOUBLED | Back to present-day, because we’ve got a bombing to solve! Alex is desperate to find the twins, given that one of them showed up on Grand Central security footage in the days before the explosion. When she and Simon finally track Raina down, it turns out even she hasn’t heard from Nimah — the twin on the tape — in days. Long story short: The ladies have infiltrated a terrorist group in Queens, and that group wants to blow up a landmark but probably wasn’t behind the Grand Central attack.

At FBI central, Nathalie knows that Ryan is in contact with Alex and tells Liam as much. By the end of the hour, Smuggy McFakeScar is leading a raid on the twins’ house, where Shelby and Ryan happen to have arrived. Alex and Ryan escape out the back, but all of the guns and such draw the attention of the terrorist group (which is holed up across the street) and a firefight begins. One of the baddies shoots Ryan in the side (if you’re keeping score, that’s like, twice in one week) and Nathalie goes completely against everything we know about her by letting Alex and the slow-to-coagulate Agent Booth escape.