The adage “Dance like nobody’s watching” doesn’t really apply to the ballerinas of Starz’s new Flesh and Bone. As members of one of the most prestigious ballet companies in the country, these slender, determined athletes must move like every single step, gesture and facial expression is being scrutinized in microscopic detail.

On that tip, we’d like to hear what you thought of the limited series, which premiered Sunday. But first, a brief recap:

The drama begins in Pittsburgh, as 21-year-old Claire (played by Sarah Hay, Black Swan) hustles herself and her suitcase out her bedroom window — ignoring the man beating on her door from the other side — and hops a train to New York City. She arrives just in time for a grueling, day-long audition at the American Ballet Company. (Center Stage shout-out?)

Though Claire is nursing a badly damaged nail on one of her big toes, she bests the competition and is hired by the company. She’s set up in a small apartment with another female dancer, who warns her that everyone is going to hate her because she was successful on her very first ABC audition. That bears out the next morning, when Claire’s arrival in the ladies’ locker room is cause for many bitchy, jealous looks.

When Claire attends her first company class, the genre’s touchstones are then checked off in rapid succession. Paul, the impulsive jerk of an artistic director (Ben Daniels, House of Cards)? Check. Kiira, the aging prima ballerina who’s secretly relying on pharmacology to help her through? Check. The absolute horror and humiliation Claire feels when publicly called out for the simple mistake of forgetting to turn off her phone’s ringer? Check.

As punishment for that gaffe, Paul insists that a near-tears Claire perform a lengthy piece of choreography in front of the others — cold. He, and they, expect her to fail spectacularly. Instead, she nails the solo, leading him to realize he’s got a new star (and perhaps the company’s salvation) on his hands. 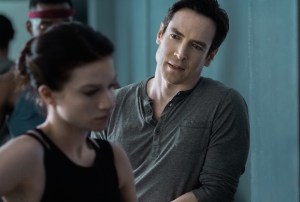 Claire’s new success only makes her less popular with the rest of the company, save a few; they include Ross (Sascha Radetsky, Center Stage shout-out!), a straight male dancer who possibly may just want to get in her tights, and Daphne (newcomer Raychel Diane Weiner), who is a stripper in her off-hours and who lends Claire a dress to wear to a soiree for ABC patrons.

All of the success is clearly a lot for Claire to take in, especially given that her brother, Brian, calls incessantly and seems like a big reason she ran away from home. When she finally answers at the end of the episode, he demands to know where she is — pleasuring himself while doing so (ugh) — and she cries.

Starz has made a big deal out of how Flesh and Bone will show the gritty side of professional ballet, and I’m not opposed… even though the premiere’s sex, nudity and terrible closing scene felt like “Look ma, premium cable!” to me. But is there no one in ABC who feels any joy while engaged in one of the yes, toughest, but also most beautiful art forms in existence?

That said, the gorgeous dancing, the show’s pedigree (it’s from Breaking Bad’s Moira Walley-Beckett and choreographed by Center Stage’s Ethan Stiefel ) and the possibility of seeing So You Think You Can Dance alums like Alex Wong in the background will keep me watching — for now.

That’s our take, but we want to hear what you thought. Grade the premiere via the poll below, then hit the comments to elaborate on your thoughts!