This week’s Vampire Diaries saw the birth of a new romance, the rekindling of an old flame and the twisted promise of murder — a typical Thursday in Mystic Falls, really.

Executive producer Caroline Dries spoke with the press about this week’s biggest twists (#Benzo?!) and how they’ll affect the show’s future. But first, a quick recap:

* The latest flash-forward revealed Bonnie’s future love interest to be none other than… wait for it… Enzo!
* Valerie told Stefan the truth about their almost-baby, a fact he neglected to relay to Caroline before offering to let Valerie live with him.
* Alaric learned that “Jo” isn’t really Jo, as the Phoenix Stone actually holds other vampires’ souls.
* And Damon, upon learning that Lily suggested Kai put Elena under the sleeping spell, decided to let her bring back Julian… so she can watch him die at Damon’s hands. 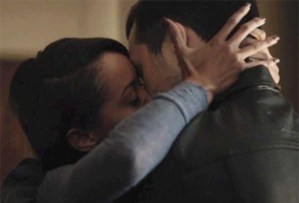 BONNIE’S NEW MAN | The idea for a Bonnie/Enzo pairing began in Episode 21 of Season 6 when Enzo visited came to visit Lily at the Salvatore Mansion, where he was met at the door by Bonnie. “Kat [Graham] and Michael [Malarkey] had such … chemistry in that really short scene,” Dries recalls. “We were like, ‘Huh … Let’s explore that relationship.’ Of course, they have no reason to like each other; in the present day, we’ve been telling their hate story. So the whole point is that, when you see them in the future, you’re supposed to be like, ‘Wait, how did they get to there?’ Hopefully it created enough intrigue to keep [fans] guessing.”

TYLER’S SECOND COMING | As TVLine previously reported, fans have not seen the last of Tyler Lockwood. Now, Dries is ready to tease a little more about what she calls the “mythology arc” in which Tyler will find himself: “He’s going to have sort of a side story that will help us later in the season to introduce us to this new world.”

JULIAN VS. ENZO | Is Mystic Falls’ next Big Bad everything we expect him to be? Not so much, as it turns out. “Hopefully you’ll be presently surprised when you meet him,” Dries says. “He’s fun and full of life and charming and incredibly attractive. … The fun will be trying to make him reveal his true self.” And speaking of Lily’s suitors, Enzo will be invited to next week’s homecoming party for Julian. “He’ll show up and judge the competition,” Dries teases. “He’s not out [of the family] completely yet.” 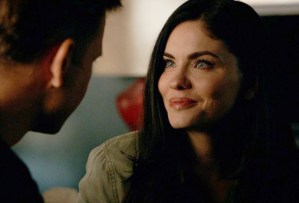 JO NO! | If you’re worried about the future of “Jo” and Alaric, I’d like to congratulate you on having a healthy sense of fear. “We have this mythology with the Phoenix Stone and what it actually does, so the mystery for the next episodes will be how Faux-Jo — or whatever you want to call her — can integrate into the world we’ve created at Mystic Falls and at Whitmore,” Dries explains. Meanwhile, Alaric will struggle with how to “handle somebody who looks exactly like your dead wife, but isn’t.”

As for those twins we saw in last week’s episode, Dries says we’ll get “some pretty good info” during the “teaser, so to speak, of the next episode. So don’t come in late to that episode.” (And in case you’re wondering, it’s “possible” that the spirit inside Jo’s body is someone we know, but Dries says she “wouldn’t start writing fan fiction” about it if she were us.)

STEROLINE’S PLOT THICKENS | As more information is revealed about Stefan and Valerie’s past, “it will start to make [Caroline] feel insecure about where she stands with him,” Dries says. “She’s not an insecure character, [but] these little things keep chipping away at her. … Stefan will struggle with how to be a good guy to validate his relationship with Valerie and also feel like he’s not leaving Caroline in the dust. … In Episode 6, he’ll admit how this affects him, even in present day. [Meanwhile, Caroline is] going to find an inner strength she didn’t know she had.”

X MARKS THE PLOT | Lastly, let’s talk about those weird X-shaped scars that keep popping up, both in the present day and in flash-forwards. “We saw in the future that Stefan has that scar, and we saw that Bo has one that’s healed,” Dries notes, promising that “right when you think you understand how Stefan got his in the future, you’re going to be thrown for a loop. It will be a recurring theme throughout the rest of the season.”

Your thoughts on the latest TVD developments? Hopes and fears for the future? Drop ’em all in a comment below.