Bonnie and Alaric’s ongoing Frankenstein experiment finally bore fruit on Thursday’s Vampire Diaries, though it wasn’t Mr. Saltzman’s dearly departed who returned to the living — at least not at first.

Oscar, the stoner heretic who died (for the second time) at Valerie’s hand last week, was once again made free to run amok in Mystic Falls, turning the beloved town into an all-you-can eat buffet. My personal favorite meal came in the form of a tour bus hoping to catch a glimpse of some spooky activity. [Insert joke about being careful what you wish for here.]

You’d think that after all that trouble, coupled with the knowledge that the Phoenix Stone turns dead people into living nightmares, Bonnie and friends would abandon their quest to revive Jo. Unfortunately, that kind of decision would require clarity and sense — two things that seem to be in short supply this season.

It’s funny, I was pretty torn up when Kai initially knifed Jo in the baby-machine at the end of Season 6, but if I knew what bringing her back would entail, I never would have wished for it. (This week’s final, eye-opening scene was thoroughly haunting… and not in a good way.) 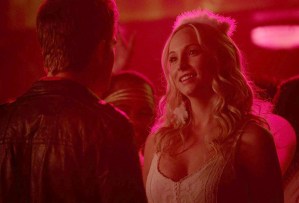 SPELL’S DOWN! SEXY TIME! | Thursday’s episode immediately turned from Halloween to Christmas for Team “Steroline” as Ms. Forbes’ hands-off spell was finally lifted, clearing all traffic on the couple’s road to Pound Town. Well, almost all the traffic; their foreplay (Forbes-play?) was briefly interrupted by Caroline, who felt the need to vocalize her concerns about Stefan’s history with Valerie. Fortunately, Mr. Hero Hair was able to quell her fears — for now, at least — with a single sentence: “You and I have had more history in the last five years than most people have in a lifetime.” Caroline’s post-coital expression implied that she still has her doubts, and while I’d like to think Valerie is merely a light bump on the couple’s journey to happily-ever-after, I can’t exactly un-see the flash-forward in which Caroline refuses to speak with Stefan. Gulp.

STRANGE BEDFELLOWS | Speaking of Valerie, the keeper of Stefan’s virginity formed a surprising — and most unholy — alliance with Enzo this week. While Enzo remains loyal to Lily, the prospect of Julian returning to her life doesn’t sit well with him for reasons obvious to anyone who witnessed his embarrassing (aka unreciprocated) confession of love a few weeks ago. Valerie, of course, has her own reasons for wanting to keep the baby killer at bay, even if it means lying to her “mother” in the process. (Spoiler alert, and I can say this without having seen any future episodes: This is not going to end well for anyone.) 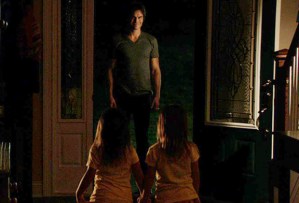 DAD-LARIC?! | Now, it’s time for my favorite part of recapping Season 7: dissecting this week’s wacky flash-forward! For starters, we saw that Alaric is living in a lovely house with a pair of mildly creepy twin daughters, which made a lot more sense when Jo opened her own eyes at the end of the hour. (I guess her unborn children are also revived?) But because no one on The Vampire Diaries is allowed to be happy for too long, Damon arrived on the scene to warn Alaric about a pretty significant danger on the horizon. I say, bring it on!

LET HER GO | We should also probably discuss Damon’s decision to stop obsessing over Elena, a revelation I was pretty surprised to see this early in the season. Inspired by a few words of wisdom from Lily (“This boyish refusal to let her go will only put her in more danger”), Big D decided to put down his (metaphorical) sword and pick up his (literal) pen. “I don’t know who I am without you,” he wrote (in a journal!), “But as long as I’m with you, time will stand still.” That’s deep, man.

OK, TVD fans, let’s talk: Were you relieved to see Caroline’s spell undone? Surprised by Damon’s decision to let Elena go? Super-nervous at the sight of Jo’s eyes opening? Drop a comment with your review of the episode, plus your newest flash-forward theories, below.