Let’s take a moment to examine how utterly, heartbreakingly and repeatedly screwed Ms. Jenny Mills has been in the short time since Sleepy Hollow introduced her.

Crazy mom. Absent dad. Bounced around the foster system. Had a traumatic incident with a terrible demon as a young teen. Locked up in an insane asylum for telling the truth about the whole demon thing. Possessed by a different, though no less horrifying, demon. Tossed back in a psych ward. Lost the only person who’d shown her some kindness.

And now, thanks to this week’s episode, we can add “grabbed a magical thingamajig and may have accidentally set herself ablaze from the inside” to Ms. Mills’ ongoing list of woes.

Sadly, Jenny probably won’t get the attention she’ll likely need, given that the Witnesses realize that what they thought was Pandora’s buffet of fear was merely an amuse-bouche of terror, and the really bad stuff is on its way.

To paraphrase Ichabod Crane, “Strength, Jennifer Mills!” Let’s take a look at what happens in “This Red Lady From Caribee.”

DATE NIGHT | We pick up with the Witnesses following through on their to-do lists from last episode: Ichabod on a hibachi-restaurant date with Zoe, Abbie promising Daniel she’s about to tell Jenny and Joe to leave the Nevins situation way the heck alone. Jenny’s not psyched about the kibosh, but she agrees to play nice so as not to jeopardize Ab’s job at the FBI. Ichabod’s endeavor (good lord, why is he shouting?) is less successful: He relies on a cheat sheet of first date questions to facilitate conversation, then spends too much time discussing how a well-placed rapier jab would put an end to the chef’s dramatic knife work. Zoe, understandably, looks a little troubled, which is the first inkling I’ve had that she has sense.

WHAT’S THE BUZZ? TELL ME WHAT’S HAPPENIN’ | Meanwhile, Pandora summons a Trinidadian baddie who’s basically a woman made out of stinging insects. The aforementioned “red lady” is in town to engender “the fear of fear itself” in the general public, starting with the judge who was supposed to oversee Ichabod’s smuggling case (remember? The one that landed him in prison at the beginning of the season?). After the judge is stung by a swarm of wasps in his quarters, he becomes wildly irrational, screams “You can’t trust anyone!” and dies on the bench. While Abbie and Ichabod calmly discuss what evil might’ve been afoot, I wonder if anyone is going to even try to call an ambulance? A GUY JUST DIED IN FRONT OF YOU.

Based on a dead red wasp Ichabod finds at the scene, the Witnesses quickly put together that the bugs is an enchanted one whose sting causes fever, paranoia and death — and that Grace Dixon once treated George Washington, at Betsy Ross’ request, for the same affliction. (One of my favorite moments in the episode comes when Ichabod steadfastly refuses to believe that his beloved Gee Dubs had ever been reduced to a paranoid mess, and Abbie shuts him down with her exasperated “Yes.”)

While we’re near the subject, can we talk about Betsy for a minute? I like her. I like what she does in the story. I like the fact that she’s confined to the flashbacks. I like that she wears corsets and pants, even though it is absolutely ridiculous. I want to know what conditioner she uses. I think Nikki Reed is doing a good job in the role. And mostly, can we agree that she is not the Katrinapocalypse many in the fandom feared she’d be?

DANIEL’S TORCH STILL BURNS | After a PTA president is killed, Abbie realizes that the insects are taking down authority figures. “And look at me, profiling a bug,” she quips. Unfortunately, the next bigwig stung is Daniel. With Mills in the car, he careens through traffic and yells that she’s trying to undermine him; only when she sees the bite on his neck does she realize he’s not himself. And when she gets him under control (by dropping him like fifth period geometry and handcuffing him), she holds him in Jefferson’s Masonic cell while Jenny and Joe gather the ingredients for a tonic to help slow the illness. During a rough moment for Daniel, he mentions the Outer Banks and a shack on the beach. “That’s when I found you. That’s when I knew,” he says sadly. “You left that place, but I’m still there.” Interesting little peek into that tryst, no?

MILLS IS MARKED | Meanwhile, Jenny has a scary moment while buying an elusive tonic ingredient from a Trinidadian store: When the clerk touches her hand to return her change, his eyes go all white at the same time his voice gets all low and otherworldly. “A shadow older than time falls over your soul. You shall be claimed,” he says. Once the clerk returns to himself, he warns Jenny that “Your fate has changed” and tasks a flummoxed Joe with protecting her.

But Joe’s got other things on his mind: Namely, meeting with Nevins, who tells him that his father was just as dirty as he feared. The black market kingpin hints that August stored money in Lichtenstein and Geneva back in the day, and that young Corbin is just as susceptible to nefarious goings-on as his dad was. “You’re drawn to the darkness, and you can’t look away,” he says, removing a glowing red disc from the Shard of Anubis. Or maybe that is the Shard of Anubis? Anyway, Jenny’s outside with a gun, and she quickly takes back the red dealie. But it evaporates in her palm as she and Joe and making their getaway, and later that night, she is tormented by chaotic nightmares while her skin seems to be lit on fire from within. 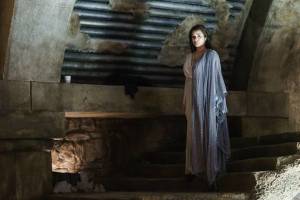 STOMP THE BUGS | Back at the archives, Ichabod and Abbie use some giant assumptions about where the victims were bit in order to triangulate the location of the red lady’s hive. And because the space on the map looks just like the six-blossom tree on the back of Ichabod’s illegal tablet, Mills and Crane theorize that it’s Pandora’s lair, too.

At first, I thought Abbie was carrying a can of Raid into bug central, and I was on board with that, because it’s how I handle most insect-related threats to my well-being: Douse liberally with poison, run away, hope that whatever creepy-crawly I sprayed didn’t somehow mutate into a stronger creature from the impromptu shower I just gave it. But Abs instead uses the can and a lighter to create a blowtorch; between that and the canister of acid Ichabod hands her, she manages to destroy the hive. (Though if someone can tell me how she didn’t get stung during that swarm at the end, I’d appreciate it.)

While Mills is going all Terminex on this week’s monster, Ichabod is dealing with “the bitch with the box,” (© Abbie Mills 2015), who stops his arrow as though it were a spitball and then demands that he and the leftenant “Bear witness” as she steps into an opening in the tree and disappears. (Side note: Anyone else worried for a minute there that Abbie was going to gallop in after her?)

WHAT IF…? | So with Daniel on the mend (conveniently with no memory of his ordeal) and Ichabod enjoyinh a far more normal second date with Zoe, the Witnesses just bide their time until Pandora’s return. And while we have this brief lull, I’d like to raise a point: Wouldn’t it have been awesome, albeit unoriginal, if either Ichabod or Abbie had been stung by the evil bugs? I wouldn’t have minded watching either Witness come a little unhinged, with his or her worst fears voiced for the other to hear, a la Scully in the “Wetwired” episode of The X-Files.

Yes, other shows have done it. But they’ve done it because it’s good drama, and Sleepy is rife for this kind of situation right now. Abbie’s got a lot going on this season — new job, the dad situation, what I’m convinced are still unresolved thoughts about Ichabod taking off for months without a word — but it feels like most of that is locked up in that ever-vigilant mind of hers. And Ichabod’s no stranger to ache and/or anger, with Katrina not even gone six months at this point. Bottom line: I wouldn’t have minded if either of them came a little unhinged and gave us a smidge of the emotions roiling inside them, even if it were just for this episode.

Anyway, now we want to hear what you thought of the hour. Sound off in the comments below!