Question: When will we learn who is in the grave from the Arrow season premiere? —Kyle
Ausiello: Though the producers are being purposefully vague about the timing of that reveal, here’s something to at least whet your whistle. Co-showrunner Wendy Mericle told Matt Mitovich, “There might be” additional flash-forwards “here and there… right around midseason,” that certainly will add to the “Who dies?” mystery. “We’re definitely toying with that,” the EP added, “and when and if we do decide to do that, it will reveal even more pertinent information about not who’s going to be in the grave but certainly where our characters are when that [death] happens.”

Question: Is the May/Daisy relationship going to get some attention now that May has returned to S.H.I.E.L.D.? There was so much great progress in Season 2, but it felt a little undercut in the season finale. —Olivia
Ausiello: EP Jeffrey Bell acknowledges that May hasn’t been able to hang with Daisy/Quake née Skye this season, “and we haven’t forgotten that.” But a roster of “75,000 series regulars,” as he puts it, coupled with the desire to mix things up, have precluded any team-up. “One of the things we enjoyed doing at the beginning of this season is pairing people up differently — Hunter and May, Mack and Daisy, Fitz and Bobbi…. And I think some of those have to play out,” Bell notes. “We have a lot of very strong, badass women on the show, but yes, seeing May and Daisy fight together would be supercool.”

Question: Out with it, Michael! Give us that Gilmore Girls scoop, please? —Jennifer
Ausiello: I got tired of waiting for you Ausholes to ask me about it so I turned it into a big fancy standalone story. 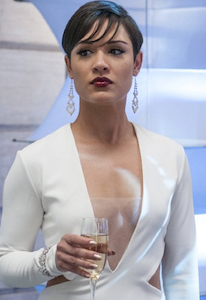 Question: What craziness is coming next to Empire? —Ruth
Ausiello: I can’t guarantee it, but I wouldn’t be shocked if we’re headed for the club — the strip club, to be specific. “Lucious convinces Mimi to mix business with pleasure, as the two grow closer,” showrunner Ilene Chaiken teases. Bonus Scoop: The Nov. 18 installment will find Anika getting “some life-altering news,” then “going incognito to gather intel on a competitor.” Boo-Boo Kitty: Undercover? I’d watch the hell out of that spinoff!

Question: Longtime reader of your work and finally asking my first question! Considering the musical chops of several of the cast of Supergirl (Melissa Benoist, Jeremy Jordan and Laura Benanti!), can we expect someday be treated to a musical episode of Supergirl? —Rae
Ausiello: Really? You’re going to make that your first Ask Ausiello question? A Supergirl musical episode? Love you like the sister I never had, Rae, but you need to seriously up your AA game if you want to be taken seriously here. I’ll cut you a little slack since it is your first time though. In fact, I’ll even lob a S’girl scoop your way: Episode 11 will mark the introduction of a new recurring character named Matthew, a hunky, well-built heartthrob with abandonment issues and — drumroll, please — a potential love interest for Kara.

Anything on How to Get Away With Murder? —Mark
Ausiello: What we’re gonna do here, Mark, is go back… wayyy back to the Season 1 finale. Remember how we found out that Frank, under instructions from Sam, choked the life out of Lila Stangard — but we never learned the reasons why? Showrunner Pete Nowalk says it’s always been his plan to answer that question in Season 2. “Not having written the episodes yet, I can’t promise it, but that’s obviously a huge deal that Frank is carrying this secret,” Nowalk says. “And everything that’s happened in that house since we met these people is because of Frank’s lie. We would be really bad writers if we didn’t touch upon that ever again.”

Question: Will we find out what happened to Grimm‘s Diana? —Ronda
Ausiello: The hunt for Diana “does continue,” Claire Coffee says with a laugh, though she confesses, “It’s not as active as it was.” The birth of Adalind and Nick’s son, Kelly, naturally brings up the fact that Ad “would really like to find out what’s happening to that first child,” Coffee adds. But “there is so much other drama unfolding that even the hunt for Diana is on the back burner.”

Question: Do you have something about SVU or Benson? —Felicia
Ausiello: Nothing on SVU, but here’s a Benson tidbit: I’m hearing he will be positively exasperated by what that pompous Clayton Endicott III does in next week’s episode of the ABC comedy.

Question: Whatever happened to Abby’s brother on NCIS? He was in a couple of episodes and then disappeared! –Susan
Ausiello: “There’s more Abby backstory coming after the holidays,” show boss Gary Glasberg said when we hand-delivered your question, “but I’m still in process of figuring that out.”

Question: Loving the new “ambiguous characters” on The Originals, Tristan and Lucien. Any scoop on them, or anything TO related? —Addie
Ausiello: He’s not one of the characters you mentioned, Addie, but I’d say Jason Dohring’s Will Kinney remains at least somewhat “ambiguous,” and it sounds like his storyline’s about to get a lot more interesting — especially once he starts “making connections” and getting deeper into the Big Easy’s supernatural community. “He just winds up in a real bad place, like, real bad,” the actor says, referring to one particularly nasty scene with a certain bloodsucker. “We were exhausted after shooting. Compulsions and violence, [it was] gruesome.” 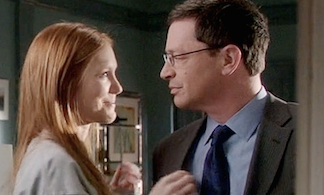 Question: Please tell me there is hope still for Abby and David on Scandal! —Jenn
Ausiello: Joshua Malina (aka David) has a gut feeling that “there’s more to David and Abby’s story ahead of us,” he tells me. “My suspicion is I feel like there’s still more to their story. They don’t have full closure. And I think he’s probably carrying a torch for her on some level.” Malina, however, quickly cautions, “I don’t really know, though. It’s pure conjecture.”

Question: Joel David Moore left Bones to play almost an identical character on Forever. With Forever now cancelled, is he headed back to Bones? –Dean
Ausiello: Slight problem: “I think he’s also doing Avatar 2 through 10 right now,” executive producer Michael Peterson says of Moore’s big-screen commitments. That said, schedule one day permitting, “I would love to get him back.”

Question: I am dying to find out more about Sam’s visions this season on Supernatural. What can you tell us about that? —Elena M.
Ausiello: Sam will be “exploring” his visions and “trying to figure out who’s talking to him and what they mean,” star Jensen Ackles previews. “So he takes it upon himself to go there without Dean, and it leaves me in the dust. Then, of course, Dean has to follow, [which leads to] some interesting alliances.”

Question: Anything you can share on Bloodline Season 2? —Christopher
Ausiello: How ’bout a spoiler wrapped in a casting scoop? Scrubs vet Ken Jenkins is joining the cast in the recurring role of Roy Gilbert, an old acquaintance of the Rayburn family and a prominent businessman with strong political ties in the Keys. Now here comes the spoiler: Kyle Chandler’s John seeks Roy’s support as he… runs for Sheriff of Monroe County. Hope voters don’t find out that pesky murder he committed!

Question: A Bates Motel Season 5 scoop, perhaps? —Amelia
Ausiello: At the risk of antagonizing “Nomero” fans, I think Norma may be getting a new love interest. The show is casting the recurring role of Gregg Edwards, a fortysomething doctor at Pineview Mental Institution who is “compassionate, grounded and empathetic, and walks a fine line between professional curiosity and personal investment in his patients’ lives.” Read between the lines, people!

Question: Any Vampire Diaries scoop? —Candice
Ausiello: In tonight’s episode, “Stefan learns a bombshell from his past as we start to understand even further the depths of Valerie’s resentment, and it will cause a problem in the Stefan/Caroline relationship,” executive producer Caroline Dries previews. Bonus Scoop: “A fun bickerfest between Bonnie and Enzo will end in a major surprise for the audience,” the EP teases.

This AAnd That…
♦ Heads-up to acting coaches and teachers everywhere: DVR this coming Sunday’s Leftovers. There’s an extended scene between Carrie Coon and Regina King that you will definitely want to show your students.
♦ Blind Item update. One of you correctly guessed the identity of the co-lead getting (possibly-permanently) killed off. Congrats to TVLine reader [REDACTED]!