It’s time to take stock, Scream Queens faithful: We’re seven weeks into Ryan Murphy’s slasher comedy, yet we’re no closer to unmasking the killer(s) than we were when poor Deaf Taylor Swift got her head mowed off in the pilot.

Sure, we know that Gigi is calling the shots in this operation, thanks largely to last night’s phone call in which she literally said, “We are murderers, hell-bent on revenge. I told you this. That is our brand.” But beyond that, do we really know… anything? 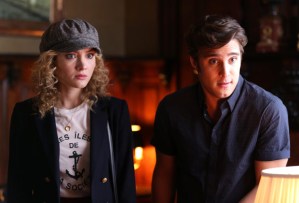 Outside of Pete and Grace’s consistently earnest-yet-fruitless commitment to cracking this case, most episodes merely consist of in-fighting amongst the Chanels, a game of Who — or What — Is Getting It From Chad and, if we’re lucky, the death of a relatively unimportant side character. (To be fair, though, those Chanel fights are golden and I’m totally ‘shipping Chad with that goat.)

Another thing: While I’ve enjoyed the bloodshed thus far, where are all the meaningful murders? I initially assumed that one of the reasons for having such an enormous cast was to make it easier to pick each character off one by one, but with the grand total of dead series regulars remaining at zero, I’m starting to question my theory. The most pivotal character killed thus far, outside of special ghost star Ariana Grande, has been Sam, more commonly known as “Predatory Lez,” who sort of almost shared a romantic something with Chanel No. 3 — but then didn’t.

So here’s my humble plea, Scream Queens: Give us clues, or give us kills. Both would be preferable, but at this point — with only five episodes left in the season — I’d settle for just one.

What’s your take on the state of Scream Queens? Are you loving it without question, or are there a few tweaks you’d make to optimize your enjoyment? Whatever you’re thinking, drop it in a comment below.