So while The Flash‘s Barry Allen has his hands full with Zoom, multiple Earths and now King Shark — can’t this kid ever catch a break? — this Tuesday’s episode (The CW, 8/7c), finds him somehow making time to take Patty out on their first date.

“They just get along really well, and it’s kind of effortless,” star Grant Gustin says, when asked about the couple’s dynamic during a set visit last month. “They are interested in a lot of the same stuff. And it’s an escape for Barry right now because everything else is heavy in his life, other than his relationship with Patty.”

With the couple enjoying some “fun” interaction for “consecutive episodes,” Gustin is hopeful that viewers “will enjoy seeing Barry be happy with at least one aspect of his life,” he adds with a laugh.

But what will his best friend (aka the woman to whom he professed his love) make of his new girlfriend? After all, Iris had some opinions about his romance with Linda Park last year.

“What’s important is Iris loves Barry and wants to see him happy,” actress Candice Patton replies, noting that the situation is similar to the Barry/Iris/Eddie setup last season. “As hard as it was for [Barry], he just wanted her to be happy. So when Iris sees that Barry has an interest in a woman – and a really great woman at that – she’s quite supportive and happy for the both of them.” 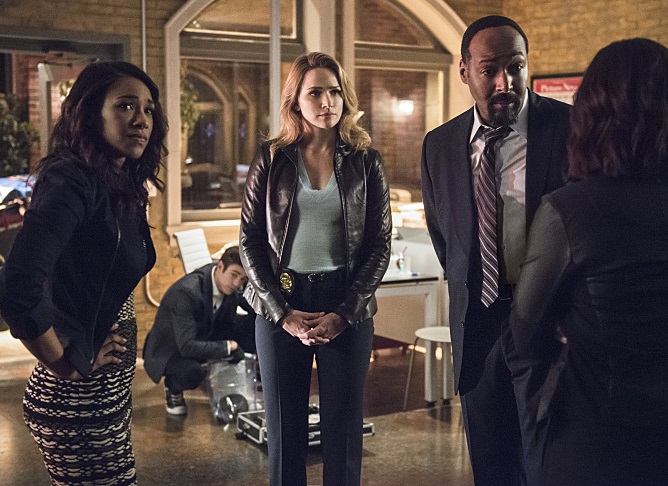 Despite Iris wanting nothing but the best for Barry, his current squeeze and his BFF aren’t going to be gal pals – yet. “We won’t see a relationship with Iris and Patty for a while in Season 2,” Patton reveals.

However, that will change as the show approaches its fall finale and beyond. “We’re moving into Episode 10 now, and it’s less of a business relationship that Iris and Patty have,” the actress continues. “It’s more of a friendship where they ask each other for advice. It’s going to be really nice to see two women share a common love for a man, in a different way at this point, to having a bonding experience over that.”

Meanwhile, Joe will also get caught up in Barry’s love life drama, leading to “a couple awkward situations” for the detective, Jesse L. Martin shares with a laugh. Barry and Patty are debating “about when at work, how much do they show their relationship, and it flips back and forth. There’s a point where I encourage him to just be free with it and then I see them being free with it, and I don’t like it,” he finishes, laughing again.

Looking forward to some light and love for Barry? How do you think it’ll all shake out? Sound off below!