If the surveillance exercise in this week’s Quantico is any indicator of the future agents’ ability to pick up on pertinent details, it’s no wonder that Grand Central is a smoking pile of rubble.

Why? Because the NATs pay shockingly little attention in a class designed to heighten their powers of observation, and then some even skip out on the follow-up task — with apparently no repercussions.

What happened to the sloppiness-will-not-be-tolerated policy Miranda laid down weeks back? Is she so distracted by her hellspawn (or is he?) that she can’t see her own recruits sneaking off for shower and/or car sex?

While I take a closer look at the tapes, let’s review the major action in “God.”

WHO’S WATCHING WHOM? | It’s the recruits’ sixth week at Quantico, and everyone’s feeling a bit randy. Ryan and Alex lather each other’s loofahs in their shared bathroom. Shelby and Caleb go at it in his room, though she’s careful to do her walk of shame at a time that no one else will notice. And even Simon is crushing on Nimah a little more intensely than usual.

Enough with all the sex, kids: It’s time to learn how to spy on people legally! This week’s subject matter leads to my favorite Caleb quote so far: “Let me guess. We’ll be surveying each other. Secrets will be revealed and lessons will be learned.” (Heh.) The NATs pay so little attention to video and audio feeds during the aforementioned lesson, I’m surprised that most of them make it to the advanced round… which is spying on Miranda and her family. Wait, what?

NICE WORK, LIAM | The homecoming of Miranda’s son, Charlie, is going just as badly as she feared: She’s missed three days of work because she’s too scared to leave him alone in the house. “The boy tried to shoot up a school,” she tells Liam when he shows up. “Who know what he’s planning to do next?” O’Connor shows up to tell her to go back the the job; he’ll stay with Charlie for a little while to suss out what’s up.

So Liam makes himself a BLT and decides to eat it in Charlie’s room. Charlie isn’t happy about that; similarly, I’m not happy that the set designer thought a poster that says “Heavy Metal Rules” is a thing that anyone over 7 would hang on his or her wall. Charlie is definitely irked about many things — his father’s death, Liam’s sudden disappearance from his life when his mom stopped seeing him — but the biggest is that he thinks Miranda framed him for the thwarted shooting.

What Charlie says, coupled with Miranda saying that the teen refuses to admit what he wanted to do, makes me think that he was a suicidal — but not homicidal — kid who might have gotten screwed the way Alex did. By why? Yeah, not sure yet. Just a working theory. And that message he gets from what I’m guessing is the terrorist group is probably not good in any way.

While Alex and Ryan are listening to the house, Liam finds Ryan snooping around outside and starts talking about all of that watching-Alex business… which Parrish hears, via the microphones, and then takes off in a huff. He eventually finds her, and she demands to know whether sleeping with her was part of the mission. “No, that was me,” he says. But she still hates him a lot right now, enough to switch rooms with Nathalie so Booth and Parrish no longer share a sex shower. Oh, and Alex bugs O’Connor’s office, seemingly without him knowing. 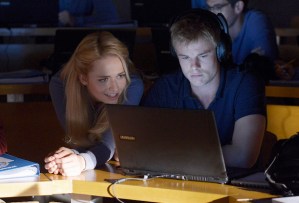 NO STRINGS | Caleb is a little hurt that Shelby seems to want him for his body and nothing else, especially because he thinks she’s dating Brandon for real. But when Nathalie says she and Ol’ Seen-But-Not-Heard (I think he’s had three lines so far?) are an item, Caleb realizes that Shelby’s not dating anyone… yet still only willing to spend time with him if he’s naked. She counters by saying that she really likes him, but needs to focus on her studies. “I need this to be what it is,” she purrs, and he caves like a Jack-o-lantern a week after Halloween.

TWIN TROUBLES | Simon approaches Nimah about a date, but because it’s really Raina who likes him, the sisters switch off so Raina can have some alone time with the bespectacled one. During their chat, he admits he was only pretending to be gay as a way of setting boundaries — like she does. “I have boundaries until I know I can trust someone,” she replies, removing her hijab and taking down her hair. They kiss, and it’s sweet.

That is, until a few days later, when Simon casually enters her room and sees both twins there. He freaks and flails, hitting his head on a counter and knocking himself out as Nimah sends Raina running for Miranda. And when Simon comes to, he’s locked in the bathroom.

FACES AND PLACES | Now, the current day plot! We learn Caleb is the deputy director’s son — woah — and he’s flying in the face of Bureau policy by working the Grand Central case with his dad. He’s also furiously searching all the video footage the FBI has data-mined from security cameras and social media to get clues to how Alex pulled the whole thing off.

Alex is convinced that he’s watching the tapes to erase himself and his involvement in the bombing. Shelby’s no help — she hasn’t talked to Caleb since Quantico — but Simon casually sets it up so Alex can watch Caleb’s computer from her own. The biggest takeaways from this endeavor? Shelby was carrying on an affair with Caleb’s dad (!), going as far as to fake her Buenos Aires trip so they could hole up in a nearby hotel without anyone knowing, and Nimah and/or Raina was in the building in the days before the explosion.

I know we should care more about the Nimah/Raina connection, but all I want to know is what in the what-what about Shelby and old man Hass? Caleb apparently learns about that pairing the same way we do — by watching his dad sweep Shelby’s tonsils as though his tongue were a uranium-detecting device — and it upsets him so much he gets wet-eyed at his desk. Their confrontation later is even worse, with him confessing that she was the only person who made him feel like a better man than his pop. Ouch.

And because it makes me feel useful to do so, I would like to point out that the Andaz Shelby referenced earlier as the spot of her love-nest weekend with Clayton is indeed across from the New York Public Library — and mere blocks from Grand Central Terminal.