This Sunday on ABC’s Once Upon a Time, Merida took aim at Rumple’s sweetheart, Arthur said no to ‘shrooming and Dark Emma played (and lost) “Let’s Make a Deal,” twice.

My expectations for this episode were on the low side, going in. The Merida-heavy flashback story screamed of being hokey, while Rumple’s journey as a cowering coward thus far has been, among other things, just sad.

The Storybrooke half of the episode, though, actually was quite solid and delivered a surprising amount of payoff. Having let Rumple escape (by using poor Chip’s shards to cut himself free), Merida was tasked by Dark Emma to target Belle, to force his hand into being a hero. Rumple met up with Belle at the library, then set out to his shop to secure some magic. But first, he thanked her — twice — explaining that just as he was about to give up during his coma, having decided he didn’t deserve to live anymore, her voice nudged him to reconsider.

At the shop, Merida had the rug literally pulled out from under her, affording Rumbelle time to make tracks. But when Belle saw that Rumple planned to drive them out of town — to run away — she hit the brakes. Parting ways with Rumple, Belle promptly ran into Merida, who is compelled to drink the potion that turns her (like her mother) into a bear. The beast chases Belle until Rumple resurfaces to intervene. Swatted and then pinned down, Rumple thinks to lob into the bear’s maw the anti-transformation powder he planned to use to leave town, successfully returning Merida to her carrot-topped form.

Merida brings Rumple to Emma’s cellar, where he is to finally complete the task of removing Excalibur. On the off chance he cannot, he first apologizes to Belle for “everything,” saying if he had the chance again he’d be the man she deserves. “It’s never too late,” she warmly responds. Rumple however can pull the sword from the stone, lobs it at Emma’s feet and warns her that she has made “one terrible mistake — you turned me into a hero.” And while Storybrooke is lousy with ’em, “None of them are me.”

Elsewhere in Storybrooke: Dark Emma broke Zelena out of her cell and gifted her with onion rings in the name of making a deal, for the Wicked Witch’s services as a wielder of the Apprentice’s wand. In trade, Emma will give her freedom and protection. Zelena however firmly declines, saying she doesn’t want any darkness hovering around her baby-to-be. This (barely) cues up a chat about children resenting parents, and how Henry will never forgive Emma for what she did to Violet. Emma scoffs at the idea of undying resentment, to which Z reminds her, “I killed Neal — ready to kiss and make up?” IOW, no deal.

Regina, the Charmings, Hook and Belle meanwhile sought to use the crimson toadstool to summon Merlin, in part to solve the mystery of why Emma came back from Camelot as the Dark One. Thing is, someone “chosen” by the master sorcerer must work the magic — meaning Arthur, who in private sabotages their plan by throwing the ‘shroom into the fire pit. Little does he know, magic mushrooms don’t burn. Regina then realizes they have one other “chosen” option — the Author. Steadfastly believing his mom is somewhere inside Dark Emma, Henry obliged and summons a “voicemail” from Merlin, who says their only hope at this dire stage is someone named… Nimue.

Turning to the flashbacks… 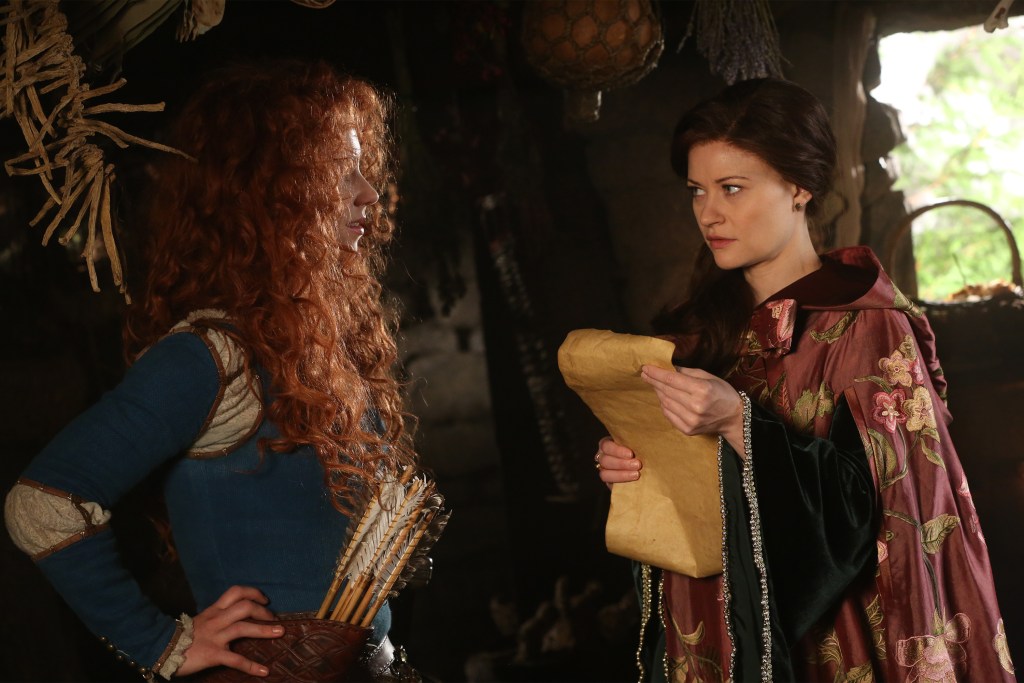 After Merlin, like a boss, showed off his magic-throwing swag in the course of freeing Lancelot, the Merida story was as slightly goofy as I feared — though it did offer Belle multiple opportunities to be clever, someone who knows enough about magic to make Merida (ahem) “enlist” her to help rescue her kidnapped bros from rival clansmen. You had to see where this was going (with Belle slipping Mer a placebo vs. bear potion), but the way the archer shot down the firing squad’s arrows was rather nifty. (Plus, the camera kinda loved Emilie de Ravin this whole episode, which never hurts.)

Meanwhile in Camelot, we got a tiny scene between Merlin and Emma, where — with the help of some Apollo bars — he reminds her of their long-ago first meeting. Emma raises the Q we all had (i.e. “How were you a movie usher if you were stuck in a tree for 1,000 years?”), but he says what’s important is that he somehow got his message to her (even though she wouldn’t remember it without his prompting?). That although Excalibur was already been pulled from the stone, it will return to whence it came, so she must be mindful to leave it there. The fact that Emma, as we have seen, does not leave Excalibur be makes us wonder why she ultimately defies Merlin. Or is she operating on a secret agenda that merely looks dark?

What did you think of “The Bear and the Bow”?