Welcome to the world, Kelly Burkhardt: Too bad you arrived just as the monsters are about to take over.

That’s a quick take on Grimm‘s Season 5 premiere, an hour in which: Trubel was kidnapped, Agent Chavez was killed by a mysterious Wesen faction, Nick and Adalind’s son was born, and Meisner was revealed (to the audience only) as having worked with Chavez… and therefore against Nick.

TVLine chatted with the actors playing the new parents — stars David Giuntoli and Claire Coffee — about the Wesen war ahead and what happens when a former Hexenbiest and a grieving Grimm decide to make a go of it as mom and dad.

TVLINE | What does Nick think he knows/doesn’t know after Chavez dies?
GIUNTOLI | Nick has really no idea where to go after Chavez dies. She was his only lead. But when the phone rings, well, someone’s calling Chavez who knows Chavez, so this must be the guy! 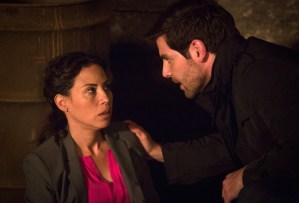 TVLINE | The scratches on the wall, Chavez saying, “It’s war” — are leading to a season-long arc about the rise of the Wesen. What can you tease about how that will play out?
GIUNTOLI | It’s almost like a global uprising of Wesen, and they are breaking all the rules. They are thumbing their noses at all of the Wesen traditions, which are: Chill out, keep a low profile and we won’t get killed… They’re like, “To hell with trying to behave.” It is a global threat, and there’s no limit at which they will stop… The Scooby Gang and other groups that you will meet throughout the season are going to be tasked with squashing this uprising.

TVLINE | Adalind is no longer Wesen. When she becomes aware of what’s happening with the uprising, does she feel any pull to side with the Wesen? Or is she fully on the team with Nick?
COFFEE | She is not interested in becoming a hexenbiest at all again. She’s on Nick’s side and striking up a relationship, like a friendship, with Rosalee. She’s not part of the Scoobie squad, but she’s definitely endearing herself to the Portland crew.

TVLINE | As she heads into the birth, Adalind really doesn’t have much going for her. She’s very alone.
COFFEE | The going-into labor scene was initially slated for Season 4. It was the last day of production, my last day of work. [Editor’s note: Coffee ended up not shooting the scene that day, due to a hospitalization related to her real-life pregnancy.] I was totally fine, obviously. Everything was fine. I was so happy to get to shoot all of that after I’d actually had the baby. I could do a much more convincing acting job, and I was like, “OK, I don’t have to worry about any of the bad juju surrounding this experience.” Adalind had the most hair-raising, dramatic birth situation, but mine was good. [Laughs] We’re cool.

[As for Adalind], every time you think she’s at her lowest point… it’s like, “Oh no no, it still can get a little bit lower.” She has this baby, she has no one. She’s forced to rely on people she has wronged so many times in the past.

TVLINE | The post-birth scene was one of the least sentimental I’ve ever seen on TV.
COFFEE | [Laughs] I’m glad it comes across that way. What Adalind has gone through is trumped only by what Nick has gone through at that point.
GIUNTOLI | I know you have to take liberties for drama, but 24 hours ago, he found his mother’s head, the love of his life died in his arms and Trubel was kidnapped. So Claire and I were really working against, “Hey there’s a new romance!” We wanted to slow burn that thing. So yes, it was not very sentimental. [Laughs] You know your life is busy when the birth of your son is fifth on the list of things you have to do that day.

TVLINE | As time goes on, does Nick feel more of an affinity for the baby?
GIUNTOLI | Of course. He does. You’re going to see a lot of diaper-changing gags… Nick moves the hell out of the house. That’s a big spoiler. He’s done with it. The trailer’s gone, Juliette’s gone, his mom’s gone, get me the hell out of this house. My neighbors really despise me, I’m sure. His new instinct is protect this baby, and protect Adalind, who is also protecting this baby… There’s a scene that’s going to be like the beginning of The Beverly Hillbillies where everything’s packed up on the carriage: Adalind, baby, crossbow.

TVLINE | There’s a moment where she says “Don’t hate me.” Does he?
GIUNTOLI | It’s like, “Listen woman, I’ll figure this out as I go. I’ve got to deal with some other things.”
COFFEE | The season is non-stop. So Adalind and Nick, they are roommates and their relationship changes almost 180 degrees with raising this child. Both being in such dire straits, they’re relying on each other. I do think Nick, the thing that allows him to let her in in any way because he feels like a different person, he feels so empty, losing his mother, losing Juliette, feeling betrayed by Juliette, he has his buddies but when you go through such an enormous tragedy, you just feel a little alienated from everybody. I think that allows them to empathize with one another and work on raising this baby. They’re teammates, for sure.

What did you think of the episode? Grade the premiere via the poll below, then hit the comments to back up your pick!