Take Mary Poppins, strip away a lot of the charm, add a killer rigatoni recipe, and you’ve got an idea of what The Mindy Project‘s Annette Castellano is like as a nanny.

And while Danny’s still away helping his dad in this week’s episode, available today on Hulu, his ma steps in to help care for Leo.

“She’s great at taking care of the kid, doing the house,” Rhea Perlman, who makes her first Season 4 appearance in the episode, tells TVLine. “But, you know, Annette is Annette. She’s gonna get under your skin — especially if you’re Mindy.”

Read on for more on how Annette’s latest gig unfolds/implodes, as well as to get a taste of how Mrs. Castellano will take to meeting her grandson’s other grandma.

TVLINE | Annette has been mentioned this season — she came by to help Danny when he was home with Leo — but what’s the situation when this episode begins?
It starts off with me vacuuming [Mindy] while she’s asleep. [Laughs] I think she’s a slob, I think she doesn’t take care of the kid good — the usual mother-in-law things. I’m having a ball. I love every second of it. This is what I live for. And she gets a little upset. 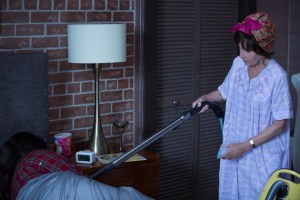 TVLINE | Is Dot in the episode?
Dot is in the episode. Well, I get fired… Y’know, it’s hurtful, but I understand. I tell [Mindy], “I totally undertand.” Who wants their mother-in-law around all the time? … The next thing you know, after I left there’s a knock on the door and there’s this young guy serving her with a subpoena, because I’m suing her for slave labor because she hasn’t paid me. [Laughs] I have a whole list of things, how long I’ve worked. Of course, the lawyer is some ditzbag Italian guy from my neighborhood, some second third cousin or something… So Dot comes with me to that. That’s where she enters. The antics ensue. [Laughs]… The Dot-Annette relationship, that’s just one of my favorite things I’ve ever done. We’re best friends and can say anything to each other, too. I just love that.

TVLINE | Does Annette have any run-ins with Mindy’s mom in the episode?
The Mindy’s mom episode is another episode. There’s nothing in this about Mindy’s parents. The other episode I did film [this season so far] is when the Castellanos meet the Lahiris — so that’s when I meet the Lahiris. That’s an amazing episode, when we meet.

TVLINE | Does it go smoothly?
No. [Laughs] It is not smooth. It is anything but smooth — and there are really good costumes involved, as well. [Laughs]