Has the flame gone out for Firestorm?

On this Tuesday’s episode of The Flash (The CW, 8/7c), the team will attempt to reignite the ailing Dr. Stein’s fire as he deals with the fallout from the death of his combustive superhero other half, Ronnie Raymond (played by Robbie Amell).

“We need to find someone to pair him with to make his body whole again,” star Grant Gustin previews during a recent visit to the show’s Vancouver set. “So we’re trying to find a compatible match, but he’s declining quickly and things don’t go as smoothly as everyone would like them to go.”

It doesn’t help that the S.T.A.R. Labs crew was not expecting Dr. Stein to have such a potentially catastrophic reaction to Ronnie’s demise. “The shock for all of us was that we didn’t know that, because of his metabolic problem, he wouldn’t exist without being able to be conjoined with another person,” Victor Garber, who plays the doc, describes while promoting the upcoming Flash/Arrow spinoff DC’s Legends of Tomorrow.

Once they wrap their heads around the surprising turn of events, Barry & Co. line up some candidates to replace Ronnie. “There are a couple Firestorm options, and there are some fun scenes with those guys,” teases Gustin. 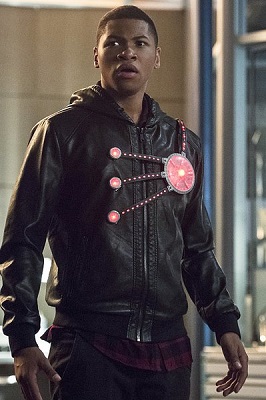 But there can only be one winner, and he’s Jax, an ex-high school athlete and mechanic (played by Franz Drameh) who nabs the position because “he’s not power-hungry for it, and in that respect, he won’t abuse” his abilities, Drameh says.

In a departure from his predecessor, “Jax does not want to be a hero,” Drameh describes. “He does not want these powers,” but the newcomer realizes that “he has to step up and embrace it and do his job.”

However, that doesn’t mean he and Stein will always get along. “It’s going to be fun to see this whole new Firestorm and just how Jax reacts with Stein,” Drameh says. “There’s a lot of back and forth, and it’s a love-hate relationship between the two.”

Adds Garber: “The dynamic is very different. I miss Robbie [Amell] because I love Robbie, but I’m very happy with the casting in this department. He’s a tremendous actor and a wonderful person. Because it’s a very different dynamic, it’s completely challenging and fun to play.”