In this week’s Quantico, all of the NATs go under cover, and some go way under cover.

Shelby, for instance, takes on the persona of someone who knows what Caleb’s O-face looks like. And Alex adopts the identity of someone no longer pretending she and Ryan aren’t having eye-intercourse every single time they’re in a scene together.

There’s a lot of sexy times in the episode, is all I’m saying — and that’s not a complaint. Because when you have people this pretty wearing uniforms this tight, something’s gotta give. So let’s check in on what happens in “Found.”

A HACK COUNTERATTACK | Let’s get the present-day update out of the way first, because it involves far fewer instances of undies hitting the floor. Alex grows despondent after seeing newspapers calling her “Terror Babe” and “Jihadi Jane.” Shelby, who hasn’t grown any more excited about being Alex’s captive, has no sympathy for her former roommate. “An innocent person does not take someone hostage,” she spits.

Alex’s pity party lasts about 20 seconds, then she’s back to the grind: She goes on the Dark Web to contact The Unknown, an Anonymous-like group she hopes will help her “change the conversation”… given the fact that the FBI now has her on shoot-on-sight status.

The Unknown meets with Alex (and Shelby, who’s in tow), but the man and woman who greet her need a few questions answered before they’ll agree to broadcast her interview. They confront her about some of her connections from her decade in India, one of whom is a guy connected to a bombing in Bangladesh. She counters that she knew a lot of people when she was there, 10 of whom have been killed, three of them in drone strikes — and she’s pretty sure none of them were terrorists.

ALEX IN THE SPOTLIGHT | The hackers seem convinced, so they go live with Alex’s interview. She maintains her innocence and adds that the people setting her up her knew what they were doing: “They framed the brown girl” because she’s the recruit the American public would have no trouble believing was a traitor. Sadly, I think the American public also probably would have no trouble believing hijab-wearing Nimah/Raina were traitors, either; if Alex’s hypothesis is sound, I wonder if this is a clue about the twins’ future in the program?

The FBI zeroes in on The Unknown’s signal, but Alex was smart: She conducted the interview in the basement of a mosque, creating both a PR nightmare for the FBI (who surround the building, guns drawn, just as services are letting out) and the perfect escape for herself as just another woman in a headscarf leaving the premises.

Shelby, whom Alex ditched at the mosque, has a long talk with O’Connor back at FBI command central. Ryan and Simon sweat that she’s going to out them as Alex-sympathizers, but it seems like she hasn’t. “I have my issues with Alex, but I don’t think she did it,” Ms. Wyatt says. What’s more, after checking out the list of FBI personnel who were close enough to have detonated the bombs at Grand Central, only three were NATS we know: Alex, Ryan and… Caleb?

BLONDES BUMPING UGLIES | Back in the training timeline, the week’s lesson is how to go undercover. “Undercover, you get a chance to start over,” Miranda tells them, and we watch as the NATs build and then try on new personas. They’re then brought to a tech company’s networking event, where the recruits — under aliases — are to mingle and try to get a private audience with the CEO.

I don’t know what’s the most awesome about the evening: Ryan entire costume consisting of… glasses? Shelby rocking a beehive? The fact that Caleb — who, like Elias, is there to observe — keeps torpedoing Shelb’s attempts to make inroads with the company’s employees? Or Miranda’s absolutely ridiculous mandate that Nimah and Raina (dressed identically, natch) switch places on the hour, because “We can’t send agents into terror cells if they can’t survive a cocktail party”?

In the end, Nimah, Ryan, Alex and Brandon — a recruit we don’t know much about — make it to the CEO meeting. Shelby and Caleb get waylaid (emphasis on the “laid”) when an argument (HER: “You’re an idiot.” HIM: “I’m an idiot savant!”) turns on a dime into hot sex that somehow doesn’t completely destroy her hairdo. Lesson? Never underestimate the power of a Southern lady’s command of hairspray. But all is not bygones and spooning afterward; he slips out of the hotel room the next morning, leaving her to miss the bus back to campus… where they make plans to have hostile car sex the next day.

Elsewhere, Ryan and Alex celebrate their undercover success by actually slipping under some covers, with an Out of Sight-esque stripping sequence thrown in for good measure. 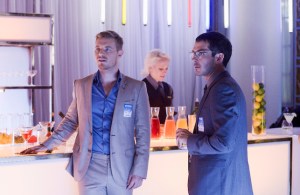 SIMON SINGS | Oh, and we also finally learn what Simon’s deal is! Though he invites Max — the guy from both the social media profile he was stalking last episode and the kissing photo in the series premiere — to the hotel, Elias intercepts Simon’s guest, hooks up with him and sends him packing. Bereft at Elias’ discovery (Max is a friend of a friend who doesn’t know Simon at all), Simon tearfully confesses that he was in the Israel Defense Forces and did some heinous things in Gaza. The glasses, the gayness, the coffee-fiending: They’re all part of the façade he’s constructed to distance himself from who he was abroad. Elias takes pity on him and says he’ll keep it all to himself. And Simon, who does seem really relieved by the confession, even agrees to go for a walk with one of the twins later.

Now it’s your turn. What did you think of the episode — and specifically Miranda and Liam’s conversation in the past? Sound off in the comments!