Neil deGrasse Tyson is an astrophysicist, which means he’s smarter than we are.

He’s also a darling of late-night talk shows — thanks to his affable manner and gift for translating science into normalspeak — which means he’s way cooler than we are.

So naturally, we leapt at the chance to talk with him in his office at the American Museum of Natural History in New York City, where he is director of the Hayden Planetarium. Our excuse? The return of his Emmy-nominated, science-by-way-of-comedy National Geographic Channel series StarTalk, which kicks off Season 2 on Saturday (11/10c).

Below are some highlights from the conversation, as well as what to expect from StarTalk‘s second orbit and who Tyson’s winning choice of dream guest is.

IF YOU NEED CATCHING-UP | StarTalk, which is adapted from Tyson’s podcast of the same name, is filmed at the museum; each episode features Tyson, a comedic sidekick (Bob’s Burgers Eugene Mirman often fills the spot) and a guest discussing a different subject — and the science involved in it. 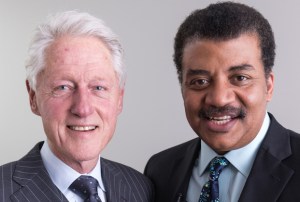 THE GUEST LIST | Season 1 guests included Star Trek‘s George Takei, director Christopher Nolan, former President Jimmy Carter and evolutionary biologist Richard Dawkins. Season 2’s roster includes Nightly Show host Larry Wilmore, actress Susan Sarandon (Thelma & Louise, The Big C), musician David Byrne and Family Guy creator Seth MacFarlane. (MacFarlane was an executive producer on Tyson’s Fox series, Cosmos: A Spacetime Odyssey.) The premiere features an interview with former President Bill Clinton. “I am revealing science where no one thought it worked,” Tyson says, calling the guest roster “quite an eclectic set of people. You would never find a common denominator among these people, except that they all have a geek underbelly that got manifested in the show.”

CHAIN REACTION | If chemistry or biology class wasn’t your forte, don’t worry: Tyson says there are no pre-reqs for his series. “Our goal is for the viewer to see and feel the ubiquity of science in our lives rather than carry some memory of a science class that they took that they then avoided or stepped around or tiptoed over,” he says. “If the science is everywhere, coursing through you, and you’re a fan of a person and you see your person talk about science with me, you can’t cordon it off anymore. It just becomes life. It becomes mainstream.”

THE DAILY GRIND | Tyson was a frequent Daily Show guest during Jon Stewart’s tenure, and as it turns out, there’s a science to why his appearances went so well: “I watched his interviews, and I timed how many sentences his guests can speak before he interrupts comedically,” Tyson says. “I got the average time and the average number of sentences, and I said, ‘If I’m going to communicate an idea in its entirety, I need to parcel it in these chunks.'” Ladies and gentlemen, the Daily Show algorithm.

BE OUR GUEST (PLEASE?) | On Tyson’s dream StarTalk guest list: President Barack Obama and Two and a Half Men star Charlie Sheen.

WAIT… CHARLIE SHEEN? | We’ll let Tyson explain: “Well, he once visited the museum with his ex-wife and their daughter… We chatted briefly and I said, ‘Why don’t you guys come up to my office, because I’ve got some crazy stuff to play with in my office? There’s something for the kid, something for everybody.’ [When they came up,] he spent 20 minutes asking me deep questions about the universe on his own, unprompted. ‘Well before the Big Bang, what could’ve been made the Big Bang? Don’t you need an energy source that could lead up to it that could make that happen?’… Intelligent, thoughtful, deep questions as though he thinks about this while no one’s looking or paying attention. So I want him on the show, because that’s the last thing you’d expect him to have a conversation about: the fate of the universe.”