Four out of five dentists agree: Sleepy Hollow‘s latest monster of the week is truly scary.

That sounds as commonplace as one of the Paul Revere clichés Ichabod mocks during the episode, but think about it: Though the Hollow is frequently filled with nefarious supernatural beasties, they’re rarely the type to leave you with actual nightmares.

But this week’s take on the tooth fairy is an ugly, slithery chunk of evil that appears only to those who fear it the most and walks like it’s in the throes of an exorcism. And if that doesn’t have you clicking the nightlight on… would you mind turning on that nightlight while I cower under the covers? Thanks.

Read on as we review “The Sisters Mills.”

REVERE TO THE RESCUE | As mentioned, this episode’s featured creature is a twisted tooth fairy who sucks out the souls of small children losing their teeth. It puts a little girl into a coma at the beginning of the hour; her older sister witnesses the attack, but no adults believe her stories about the being that was in her bedroom.

Well, almost no adults — as a result of having been children whose tales of the supernatural were ignored and/or punished, the Mills sisters are particularly interested in hearing the older sister’s account. And once they (and Ichabod) have a better idea of what happened, Crane remembers — of COURSE — that he ran into something similar back in ye olden days.

Back then, it was Betsy Ross’ niece who suddenly lapsed into a coma; a similar fate had befallen several other children in the township, and they all died. While Colonial Ichabod stands, helpless, Betsy summons Paul Revere and shuts Crane out of the proceedings, hurting his feelings a wee bit. Then Ichabod sees a bright flash under the door, and Betsy’s niece recovers soon after.

Two revelations happen once we return to the present: Ichabod puts together that Revere’s dentistry practice was cover for his supernatural activities, and Abbie lets Jenny know that Ich’s hatred of orthodontia — and the pain inflicted by Revere, in particular — means he hasn’t been to a dentist since he woke up in the 21st century. (Side note: Eew.)

‘BLESSED BE YOUR HEART’ | Through some forcibly charming Britishspeak, Ichabod — pardon me, I mean Ichabod Crane, curator of the soon to open Hudson Valley Historical Society — gets a museum to send him Revere’s dentist bag, hoping it’ll cough up some clues. Then he and Jenny head to a local elementary school to lecture the kids about George Washington’s teeth… and to suss out which of the students currently has a loose chomper and therefore will be the TF’s next target. (Side note: Between this scene and the earlier one between Ichabod and the little girl in the treehouse, it is becoming rapidly clear that Ichabod is one giant weirdo when it comes to relating to kids. I don’t recall him being this strange with the Roanoke kid in Season 1…)

After an entertaining and too-brief stakeout of the likely victims’ houses (Ichabod and Joe discussing dating — and Zoe, especially — in one car, Abbie confessing to Jenny about finding their dad… and Jenny saying she did the same thing five years ago (!) in the other vehicle), the Mills sisters see their kid run outside in terror. Problem is: Only kids can see the monster, so pretty soon the scary fairy has knocked out both sisters. Jenny wakes up; Abbie does not. 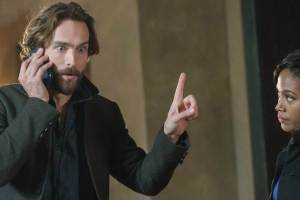 FAIRY DOWN! | Crane and Jenny sit by a comatose Abbie’s bedside at the hospital, though he eventually leaves to try to find a solution at the archive. “This isn’t your time, dear friend,” Ichabod addresses his leftenant, crying a little before he goes. (Side note: It’s moments like this, blended with the funnier Ich bits throughout the episode, that are making me feel very good about the season so far.)

Neither he nor Jenny see Pandora circling the floor in a nurse’s outfit. And later, when Jenny leaves, the evil newcomer is there when Abbie opens her eyes. (“Hi, sleepyhead” is a nice, subtle shout-out to the fans, no?) Pandora talks a lot of creepy nonsense that we’ll deal with later; in the meantime, Ichabod and Jenny realize that Revere’s dental implements were actually the pieces of a machine that can help bring the Tooth Fairy down.

So when the baddie (who, I might add, has a very impressive full wheel pose in its yoga practice) goes after the remaining sister from the beginning of the episode, Ichabod and Jenny are ready for it. There’s a chase, and of course Crane gets knocked on his tush, but they prevail and both Abbie and the little girl’s sister wake up and make full recoveries.

YOU CAN’T HANDLE THE TOOTH | So now all that’s left is for the Witnesses to parse what Pandora said to Abbie; based on a word she called Abbie, Ichabod surmises that the sorceress is the Sumerian version of the Pandora archtype… and he points out that the word is also on the tablet and means “destroyer.” He wonders if they are, in fact, the destroyers that the prophecy mentions. Back in her lair, Pandora watches all through her omniscient pond and is excited to see treevil grow a little more.

Oh, and I’d be remiss not to mention that Ichabod finally goes to the dentist and has a smoochy dream about Betsy while knocked out; his reactions to pretty much everything — including but not limited to a bitmoji of himself — as he comes to are pretty funny; Abbie’s reactions to his reactions are even funnier… but nothing is as funny as Lyndie Greenwood’s reading of “This is too good” as she pulls out her phone to record Crane with the kids earlier in the episode.

Oh, and we leave the Mills ladies in a good place, too, as they seem to agree that they don’t need to complicate their lives by reestablishing contact with their dad. “No matter what, we’ll be fine. No fight is ever gonna keep us apart again,” Abbie assures her little sis. PLEASE LET THIS NOT BE IRONIC FORESHADOWING OF THAT TURNCOAT TEASER.