When E!’s The Soup airs a live, hour-long episode from Talladega Superspeedway this Friday (10/9c), it’ll be one of the most artful examples of drafting that NASCAR has ever seen.

Stock-car racing is “one of the biggest sports in the country. It’s even bigger than baseball. So, just for that factor alone, we want to be near them,” host and comedian Joel McHale tells TVLine a few days before the broadcast. “Just the fact that they are allowing us to do it is a coup. I think we’ve tricked them. I assume they’re regretting it.”

Read on as McHale previews what The Soup is stirring up for its fast and furious episode — which comes in advance of the NASCAR Sprint Cup Series Campingworld.com 500 Race on Sunday (NBCSN, 2:30 pm) — and offers up some scoop on the “best thing ever,” aka his role in Fox’s upcoming X-Files revival.

TVLINE | Was there any question about whether NASCAR was a good fit for your audience?
When the opportunity arose, I was like, “Holy crap, yes. We would love to.” And we’ve had a relationship; I hosted the [NASCAR] Truck Series Awards one year. Our executive producer K.P. Anderson has a relationship with them. And so it just came together. And boy, were we thrilled to be doing it, because it’s NASCAR. It’s one of the biggest audiences in America, and sports seem to be one of the last live events that people tune into.

TVLINE | Aside from The Soup‘s live installments, of course.
Well, yes. Of course. The tens of millions of Americans who wait to hear what I’m going to say about Bad Girls Club. 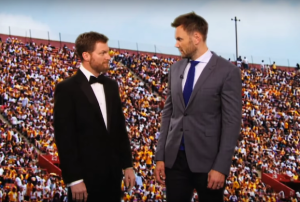 TVLINE | Which NASCAR drivers will we see during the episode?
Dale Earnhardt Jr. will be there, Danica Patrick will be there. I think we’ve got Jeff Gordon coming, I’m not sure. But there’s going to be a number of drivers in the show… It’ll be from the infield, so that’ll be interesting to see how that all comes together. I’m sure there’ll be no noise problems at all.

TVLINE | I was going to say, whenever there’s a wreck, the infield is generally not the best place to be.
Yeah. [Pauses] It’s gonna be great. If we have to get out of the way of a tire that’s flying through the air, then I will count myself as a very lucky man.

RELATED 2016 Renewal Scorecard: What’s Coming Back? What’s Getting Cancelled? What’s on the Bubble?

TVLINE | The Soup has done WWE episodes in the past; is this a new arm of the show? Will there be more sports-themed episodes if the NASCAR episode does well?
Believe me, if we can do it, if we can add more stuff like that, I love it. I love mixing it up. I love changing up the show. Believe me, I love doing the regular show. But the wrestling stuff, and hopefully NASCAR will do well, and then that will allow us to — I mean, who knows? Maybe we’ll do it from an aquarium or something. In an aquarium.

TVLINE | NBC and E! are under the same parent company, and NBC does a lot of Olympics coverage. Would you do a Soup at the Olympics?
Oh, I would love to do a soup at the Olympics. But they are so crazy about their rights for Olympics stuff, if we could somehow piggyback on the Today show’s rights and broadcast from there, I would do it in a heartbeat. Oh my gosh, yes. I would love to. But that negotiation probably has to start six months ago for the Olympics in four years or something like that. That would be the greatest of all time.

TVLINE | Let’s talk about the ­X-Files revival. There’s buzz of a romance between your character, conspiracy theorist/broadcaster Tad O’Malley, and Scully. What can you tell us about that?
Uh, we have two children and they get born real quick. Boy, what can I tell you about that that won’t piss off Fox? There’s no tongue. I will say that. I don’t want to say anything. Yes, he is a conservative talk-show host and news host, and he believes everything that Mulder believes. They just come at it from a different direction. He has made a lot of money from talking about this stuff, as opposed to Mulder, who’s been ruined more than once. It was so fun to be in it. I just love the show so much, the fact that I’m a part of it — the fact that I know Chris Carter! — I can’t believe it. I’m thrilled.

TVLINE | Was there a moment during shooting where it all crystalized and you were like, “I’m really doing this thing?!”
Yes. There was, and I won’t tell you what it was. There totally was a moment where I went, ‘Holy s—t, this is the best thing ever, and I can’t tell you what it is. [Laughs]